The Hudson River State Hospital, is a former New York state psychiatric hospital which operated from 1873 until its closure in the early 2000s. The campus is notable for its main building, known as a "Kirkbride," which has been designated a National Historic Landmark due to its exemplary High Victorian Gothic architecture, the first use of that style for an American institutional building. It is located on US 9 on the Poughkeepsie-Hyde Park town line.

Frederick Clarke Withers designed the hospital's buildings in 1867. Calvert Vaux and Frederick Law Olmsted designed the grounds. It was intended to be completed quickly, but went far over its original schedule and budget. The hospital opened on October 18, 1871 as the Hudson River State Hospital for the Insane and admitted its first 40 patients. Construction, however, was far from over and would continue for another 25 years. A century later, it was slowly closed down as psychiatric treatment had changed enough that large hospitals were no longer needed, and its services had been served by the nearby Hudson River Psychiatric Center until that facility's closure in January 2012.

The campus was closed and abandoned in 2003 and fell into a state of disrepair. Authorities struggled with the risk of arson and vandals after suspicion of an intentionally set fire. The male bedding ward, south of the main building, was critically damaged in a 2007 fire caused by lightning. The property was sold to an unnamed buyer in November 2013. The site is currently being developed as a $300 million mixed-use project called Hudson Heritage, which will include 750 residential units, commercial space, medical office space, a hotel, and a conference center. 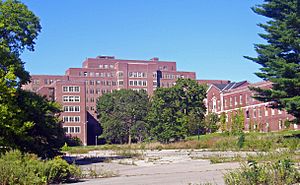 The Cheney Building as visible from a nearby strip mall, with Ryon Hall to the right.

The Hospital includes a number of unique buildings: 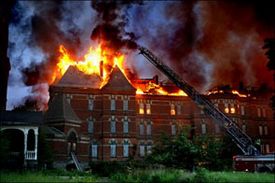 May 2007 fire at the Main Building

Redevelopment plans hit two setbacks in the mid- to late-2000s: in 2005, the Town of Poughkeepsie imposed a moratorium on new construction to cope with its growth. Hudson Heritage had been seeking to have a "historic revitalization district" created for the property that would help spur its growth.

Then, on May 31, 2007, lightning struck the sprawling south wing, which held male housing, causing one of the most serious fires in Dutchess County's history. It is unclear whether that portion of the building can be effectively restored after such severe damage. The Administration building was again hit by fire on the morning on April 27, 2018.

In the meantime, the property has remained closed to the public, with signs posted at fenced-off entrances. Local firefighters have complained, after dealing with two fires in April 2010 that appeared to be deliberately set, that the property is not adequately secured against trespassing.

As of May 2012, the campus is owned by CPC Resources, a subsidiary of the New York City-based Community Preservation Corporation, a non-profit mortgage lender that finances multifamily developments. CPC has placed the 162-acre parcel on the market, citing that the poor economy has hindered timely development. Walmart has shown a strong interest in the property, but Poughkeepsie Town Supervisor Todd Tancredi noted that the Town Board cannot envision such a large piece of land used for a single store.

An unnamed buyer purchased the campus for an undisclosed sum in November 2013. The closing for the property occurred on November 8, 2013. The site is currently being developed as a $300 million mixed-use project called Hudson Heritage, which will include 750 residential units, commercial space, medical office space, a hotel, and a conference center.

An intentional fire was set on the morning of April 27, 2018 at the Hudson River State Hospital, according to Fairview Fire District Chief. The fire was located in the wing of the old Main Administration building, and firefighters were dispatched around 3:45 AM; more than a dozen agencies responded with assistance.

Demolition began on July 13, 2016 when smaller auxiliary buildings were torn down. The heavy vegetation that mostly hid the property from plain sight was cleared in summer 2019. The demolition of Ryon Hall, on the extreme southern end of the property, began on October 14, 2019. As part of the mixed use site, the main administration building (Kirkbride), the library, the amusement hall, the chapel, and the northernmost tower of the north wing will be preserved and put in to adaptive reuse. Also, the Great Lawn will be preserved. As of May 25, 2020, the fate of the other buildings on the North Campus is still unwritten and may be added for future use.

All content from Kiddle encyclopedia articles (including the article images and facts) can be freely used under Attribution-ShareAlike license, unless stated otherwise. Cite this article:
Hudson River State Hospital Facts for Kids. Kiddle Encyclopedia.