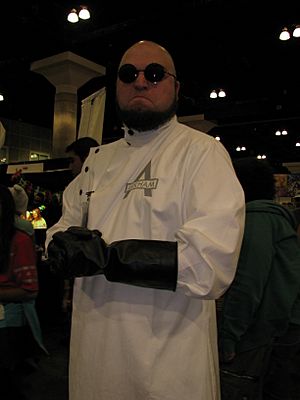 Professor Hugo Strange is a fictional evil scientist character who appears in the Batman comic books by DC Comics. The character was created by artist Bob Kane and writer Bill Finger, and first appeared in Detective Comics #36 (Feb 1940). He is one of the few villains to know the true identity of the Batman. He is known for creating mutants, zombies, or growth hormones.

He was voiced by Ray Buktenica in Batman: The Animated Series. He was also voiced by Frank Gorshin (who played the Riddler) in The Batman and he is also played by BD Wong in the 2014 TV series Gotham.

All content from Kiddle encyclopedia articles (including the article images and facts) can be freely used under Attribution-ShareAlike license, unless stated otherwise. Cite this article:
Hugo Strange Facts for Kids. Kiddle Encyclopedia.