Humphreys is a village in Sullivan County, Missouri, United States. The population was 118 at the 2010 census.

Humphreys, originally known as Haley City, was first surveyed in April, 1881 by G.M. Garvey for the Stringer family: James M., Laura J., Rachel, and Sarah S. When originally established it consisted of just seventeen blocks with 246 lots. Additions of three blocks and nine blocks were made in January, 1882 and May, 1882, respectively. It was sometime during that spring of 1882 that the towns name was also changed to Humphreys. The town experienced rapid early growth, being located on the Quincy, Missouri & Pacific Railroad, with the train depot being constructed in August, 1881. James Stringer established the first store in June 1881, and by the end of the year the new town supported four hotels, two drug stores, two dry goods stores, a general merchandise, and a millinery. A harness shop joined the business list in 1884 and blacksmiths in 1886 and 1887.
Light industry of a sort came to Humphreys in 1882 with the establishment of the Humphreys Milling Company, a steam-powered flour mill located in a large three-story building. It was said to have produced up to twenty-five barrels of flour per day at peak capacity. The citizenry's need for news was met by the Humphreys Gazette, a weekly newspaper founded in late 1881 by Joseph S. Wright. The name was changed to the Humphreys Advance in 1884 but the venture ultimately proved unprofitable and publication ceased in August, 1887.

The children of Humphreys were educated in a typical one-room rural schoolhouse, located about three-fourths of a mile northwest of the community until 1885. At that time the elementary and secondary education were combined with and housed in the building containing the Humphreys College and Business Institute. The College was established in 1884 on four acres of land donated by James M. Stringer. A large two-story brick structure was constructed between June and September, 1884 with the first class admission beginning on September 29 of the aforementioned year. Humphreys College was co-education and offered two course tracks of study—preparatory and collegiate, with a reported enrollment in 1887 of 157 students. No dormatories were constructed however ample housing was available in the towns hotels and private homes. Humphreys College and Business Institute was completely destroyed by fire on April 8, 1893. 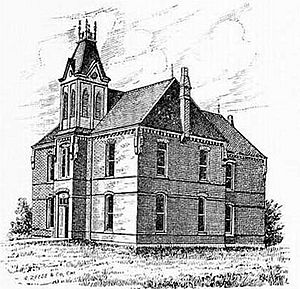 Humphreys is largely a "bedroom community" today with little if any businesses. Most citizens must travel to larger cities in the region like Milan, Trenton, Brookfield and Kirksville, Missouri for employment. After a population low of 98 in 1990 the town rebounded in 2000 with 164 citizens. Presently, children from Humphreys attend Grundy County R-5 school in Galt. The two small towns merged their schools in 1966 to create the new district. On July 26, 2011 the United States Postal Service announced plans to permanently close the Humphreys post office as part of a nationwide restructuring plan. No official date for closing has yet been announced. Humphreys first post office was established in 1881 and has been in continuous operation since.

There were 49 households of which 28.6% had children under the age of 18 living with them, 40.8% were married couples living together, 12.2% had a female householder with no husband present, 2.0% had a male householder with no wife present, and 44.9% were non-families. 40.8% of all households were made up of individuals and 4.1% had someone living alone who was 65 years of age or older. The average household size was 2.41 and the average family size was 3.37.

There were 62 households out of which 33.9% had children under the age of 18 living with them, 41.9% were married couples living together, 14.5% had a female householder with no husband present, and 33.9% were non-families. 30.6% of all households were made up of individuals and 12.9% had someone living alone who was 65 years of age or older. The average household size was 2.65 and the average family size was 3.22.

All content from Kiddle encyclopedia articles (including the article images and facts) can be freely used under Attribution-ShareAlike license, unless stated otherwise. Cite this article:
Humphreys, Missouri Facts for Kids. Kiddle Encyclopedia.