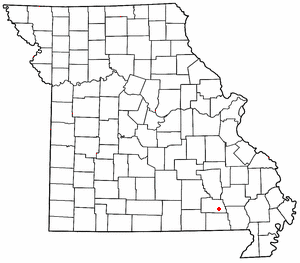 Hunter is an unincorporated community and census-designated place in Carter County, Missouri, United States. As of the 2010 census it had a population of 168.

Hunter is located on State Highway 21 about 4 miles (6 km) north of the town of Grandin, and is about 3 miles (5 km) east of the Current River. Its post office has closed and its mail now comes from either Grandin or Ellsinore.

The land on which Hunter sits was first patented by James Lieby on January 21, 1858. The land was later acquired by John Hunter, one of the stock holders of the Missouri Lumber and Mining Company, who established a sawmill at the site in 1887. This land and much of the surrounding area was then purchased by the Missouri Lumber and Mining Company, who having a contract to establish an 80-acre (32 ha) town, of which the Current River Railroad was to have half ownership, laid out the town at this location, naming it after John Hunter. The plat for the new town of Hunter was submitted at the Van Buren court house on October 27, 1888.

Hunter was the site of the junction of the Current River and the Cape Girardeau & Southwestern Railroads. The railroad depot, built in 1889, was the first building besides the sawmill to be built in the new town.

At the time of Hunter's founding, the Missouri Lumber and Mining Company opened a company store across the street from the railroad depot, opened a hotel, established a logging camp and offered lots for sale, thus initiating a building boom in the newborn town.

In 1897 in an effort to promote the sale of land, the Missouri Lumber and Mining Company planted about 400 acres (160 ha) of orchards alongside the railroad leading into Hunter. The idea was to convince prospect buyers that the over-cut land was still productive. By 1902 the orchards planted around Hunter produced about 6,000 bushels of peaches in addition to other fruits. A cannery to process this fruit was established in 1903.

On March 20, 1902, the company hotel was purchased by J. R. Kelley and operated under the name of Hunter Hotel.

In 1904 the first church in Hunter, the Hunter Christian Church, was organized, with Rev. Drenden its first pastor.

In 1912 the Munger Securities Company, a real estate company, was established, initiating a period of rapid growth in Hunter. The company operated until 1920, at which time it was dissolved.

In 1913, about the time the town was experiencing rapid growth due to the activities of the Munger Securities Company, the first school in Hunter was established. After the town voted $800.00 in bonds, the Munger Securities Company donated the land for the school building, which was completed in time for the 1913-14 school year. The first term of the Hunter school began on September 7, 1913. Miss Eunice Pace was the school's first teacher.

In 1914 a grocery store operated by A. E. Richmond opened in Hunter.

The next year, 1915, a drug store operated by S. W. Campbell, and a third hotel, the Hunter Inn, operated by Mrs. Sophis Hartman, came to town.

Also in 1915 three school districts, Hickory Hill, Grassy Valley and Hunter, consolidated to create the first high school in the town of Hunter. $4,500.00 was voted by the people of Hunter for the new school building, which was completed in time for the 1915-16 school year. Norman Greene was the first superintendent of the Hunter high school. A new two-story brick building built on the southwestern side of the town was ready for use in the 1916-17 school year. Another school building was built after this, but in 1950 the Hunter school closed and consolidated with the school at Grandin, which in turn was consolidated with the Ellsinore school district. Hunter is now part of the East Carter County R-II School District.

1917 also saw the establishment of the Hunter Telephone Company with Edward B. Joy as its president.

In 1920 the town of Hunter reached its maximum population of about 700 residents. By way of comparison, Van Buren, which is currently the largest city in Carter County, had as of the 2010 U. S. Census a population of 819.

Although currently an unincorporated community, Hunter was officially incorporated on February 22, 1923. W. L. Skinner was the president of the town board. Charles Farrel was the town clerk.

All content from Kiddle encyclopedia articles (including the article images and facts) can be freely used under Attribution-ShareAlike license, unless stated otherwise. Cite this article:
Hunter, Missouri Facts for Kids. Kiddle Encyclopedia.