Kids Encyclopedia Facts
For the community in the United States, see Hunterville, Missouri.
Not to be confused with Huntersville (disambiguation).

Hunterville is a small community on State Highway 1, in the Rangitikei district of the North Island of New Zealand. It is located half way between Taupo and Wellington and has a population (2013 census) of 429.

The township was founded in 1884 by a merchant named George Hunter. It straddles the state highway as well as the main trunk railway in the foothills forming the gateway to the Central Plateau. 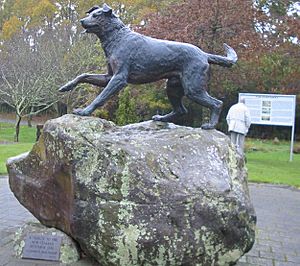 Kiwiburn, the New Zealand Burning Man regional burn, has been held here since 2014.

The closest airport or airfield to Hunterville is RNZAF Base Ohakea, an important Royal New Zealand Air Force base, which is sited 33 km to the south west. 6 km north of Hunterville is Vinegar Hill.

The Hunterville railway station on the North Island Main Trunk line opened in 1887 and closed in 1988.

Hunterville is well known for its statue of the huntaway, a specialised herding dog that uses its voice to drive the sheep. The town festival and market held on the first Saturday after Labour Day has a "Shepherds Shemozzle" - a race with man and dog with shepherds travelling from all over New Zealand to compete for the top prize.

All content from Kiddle encyclopedia articles (including the article images and facts) can be freely used under Attribution-ShareAlike license, unless stated otherwise. Cite this article:
Hunterville Facts for Kids. Kiddle Encyclopedia.