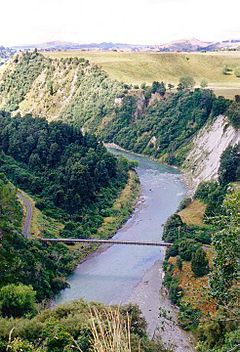 The Rangitikei District is a territorial authority located primarily in the Manawatu-Whanganui Region in the North Island of New Zealand, although a small part, the town of Ngamatea (13.63% by land area), lies in the Hawke's Bay region. It is located in the southwest of the island, and follows the catchment area of the Rangitikei River.

The Rangitikei District Council is the local government authority for this district. It is composed of a mayor, currently Andy Watson, and 11 councillors, one of whom is the deputy mayor.

The Rangitikei District was established in 1989 as part of the 1989 local government reforms.

Located north of Wellington, the district stretches from the South Taranaki Bight toward the North Island Volcanic Plateau, forming a trapezium-shaped block that includes the towns of Taihape, Bulls, Marton, Hunterville, and Mangaweka. The district has an area of 4,538 km².

Rangitikei's climate is temperate and has few extremes compared to many parts of New Zealand. According to the Köppen climate classification, this climate is classified as oceanic climate (Cfb). Summers are warm with average temperatures in the low 20s. The most settled weather occurs in summer and early autumn. Winters are mild near the coast and on the plains; it is colder inland and in the hill country, but often frosty, clear and calm. Snowfall occasionally settles in areas 400 m above sea level, such as Taihape. Annual rainfall is moderate and annual hours of bright sunshine can average over 2,000.

The district is further subdivided into seven towns and four meshblocks. The meshblocks encompass the surrounding rural areas that are not towns and as such are larger in geographic size. Rangitikei's towns are: Bulls, Hunterville, Koitiata, Mangaweka, Marton, Ratana Community and Taihape; and its meshblocks are: Lake Alice, Moawhango, Ngamatea and Pohonui-Porewa.

As meshblocks—despite their larger size—are the smallest administrative units recorded by Statistics New Zealand, there are small townships of which the demographic statistics are not recorded; all of which are in these meshblocks. These include: Crofton, Mangamahu, Mataroa, Ohingaiti, Pukeokahu, Santoft, Turakina, Utiku and Whangaehu.

goes through Bulls. The North Island portion of this national state highway, one of only eight in New Zealand, begins at Cape Reinga and ends at Wellington International Airport—passing through Bulls at 925 km.

connects Palmerston North and SH 1 at Vinegar Hill via Feilding.

Marton used to be serviced by the North Island Main Trunk (or Overlander), a railway line connecting Auckland and Wellington. However, in 2012 the Overlander was replaced by the Northern Explorer, which has fewer stops and does not stop in Marton.

All content from Kiddle encyclopedia articles (including the article images and facts) can be freely used under Attribution-ShareAlike license, unless stated otherwise. Cite this article:
Rangitikei District Facts for Kids. Kiddle Encyclopedia.