Bulls is a small town near Palmerston North on the west coast of the North Island of New Zealand. It is in a fertile farming area in the Rangitikei District at the junction of State Highways 1 and 3 about 160 kilometres north of Wellington. According to a June 2015 Statistics New Zealand estimate, Bulls has a population of 1,630 inhabitants.

Recent marketing makes puns with the name, for example "New Zealand gets its milk from Bulls" or the sign for the local police station "Const-a-bull". 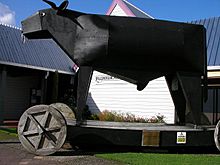 The town is named after James Bull, who founded the town and owned the first general store there. The town was originally called Bull Town, but this was changed to Clifton and then renamed back to Bulls at the urging of Sir William Fox.

The eastern end of the State Highway 1 bridge over the Rangitikei River south-east of the town collapsed suddenly in 1973 while being crossed by a bus. No-one was killed and the collapsed part was rebuilt.

The former Lake Alice Psychiatric hospital is 8 km north of Bulls, the hospital closed in 1999. Lake Alice was a large contributor to the Bulls and Marton economy.

Many Air Force personnel from RNZAF Base Ohakea used to live in Bulls however in recent years a number of defence houses are being sold to civilian buyers which has seen a steady decline of serviceman from the area.

In 2017 it was announced that the Republic of Singapore Air Force is looking at establishing a permanent F-15 fighter jet training base at Ohakea with an estimated presence of 500 Singaporian personnel. Ohakea and surrounding areas such as Bulls and Feilding would see a significant increase in military families and personnel to the area.

All content from Kiddle encyclopedia articles (including the article images and facts) can be freely used under Attribution-ShareAlike license, unless stated otherwise. Cite this article:
Bulls, New Zealand Facts for Kids. Kiddle Encyclopedia.