Hyde Park (formerly Third Swamp Reserve) is an inner-city park in Perth, the state capital of Western Australia. It is located in the north-east corner of the suburb of Perth – 2 km (1.2 mi) north of the central business district – surrounded by Vincent, William, Glendower and Throssell Streets.

Hyde Park is in the Town of Vincent. It has a lake feature in the middle which is separated into two basins. The park is popular with people walking around, weddings, picnics and barbeques. The park has 17 zones that are available to hire for events. 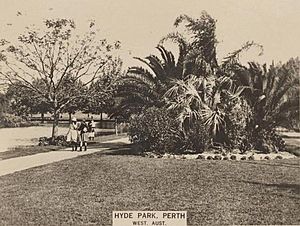 The area was originally approximately midway along a series of wetlands which stretched from Claisebrook Cove through to Herdsman Lake and included Lake Monger. The lakes and the area in which they resided were collectively known as the Great Lakes District. Today, only a small proportion of those wetlands remain.

Prior to European settlement, the area was known to the local Noongar people as Boodjamooling. After the establishment of the Swan River Colony in 1829, the European settlers gave it the name Third Swamp. In 1897, 15.5 ha (38 acres) of Third Swamp was gazetted as a public park by Lyall Hall and two years later renamed Hyde Park.

All content from Kiddle encyclopedia articles (including the article images and facts) can be freely used under Attribution-ShareAlike license, unless stated otherwise. Cite this article:
Hyde Park, Perth Facts for Kids. Kiddle Encyclopedia.