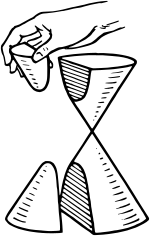 A hyperbola is the intersection between both halves of a double cone and a plane. 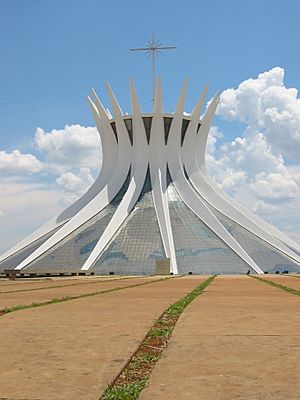 A hyperbola is a type of conic section. Like the other three types of conic sections - parabolas, ellipses, and circles - it is a curve formed by the intersection of a cone and a plane. A hyperbola is created when the plane intersects both halves of a double cone, creating two curves that look exactly like each other, but open in opposite directions. This occurs when the angle between the axis of the cone and the plane is less than the angle between a line on the side of the cone and the plane.

Hyperbolas can be found in many places in nature. For example, an object in open orbit around another object - where it never returns - can move in the shape of a hyperbola. On a sundial, the path followed by the tip of the shadow over time is a hyperbola. 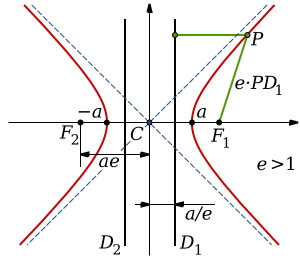 Graph of a hyperbola (red curves). The asymptotes are shown as blue dashed lines. The center is labeled C and the two vertices are located at -a and a. The foci are labeled F1 and F2.

The two disconnected curves that make up a hyperbola are called arms or branches.

A hyperbola that has a center at the origin of the Cartesian coordinate system, which is the point (0,0), and has a transverse axis on the x-axis can be written as the equation

The two branches of the above type of hyperbola open to the left and the right. If the branches open up and down and the transverse axis is on the y-axis, then the hyperbola can be written as the equation

All content from Kiddle encyclopedia articles (including the article images and facts) can be freely used under Attribution-ShareAlike license, unless stated otherwise. Cite this article:
Hyperbola Facts for Kids. Kiddle Encyclopedia.