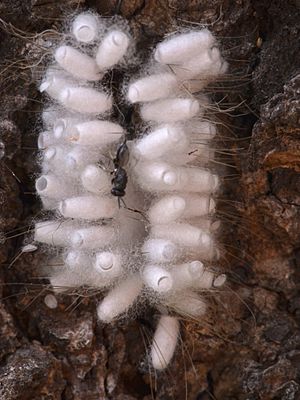 A hyperparasitoid chalcid wasp on the cocoons of its host, a braconid wasp. The victim is itself a parasitoid of Lepidoptera 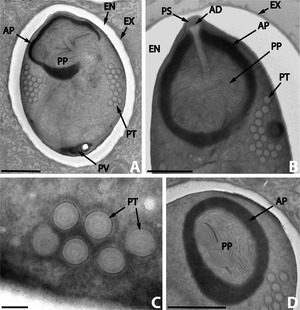 Typical examples are members of the Apocrita, and some species in two other insect orders, the Diptera (true flies) and Coleoptera (beetles). Seventeen families in the Hymenoptera and a few species of Diptera and Coleoptera are hyperparasitic.

Primary parasitism in the Hymenoptera evolved in the Jurassic period about 135 million years ago.

Jonathan Swift refers to hyperparasitism in these lines from his poem
"On Poetry: A Rhapsody":

All content from Kiddle encyclopedia articles (including the article images and facts) can be freely used under Attribution-ShareAlike license, unless stated otherwise. Cite this article:
Hyperparasite Facts for Kids. Kiddle Encyclopedia.