The park was established in 1964 to preserve evidence of North Dakota's Icelandic heritage after G. B. Gunlogson (1887-1983) donated 200 acres (81 ha) of his family's lands to the state in 1963. The land had been in the Gunlogson family for over 80 years when it was donated to North Dakota.

The park offers camping, fishing, swimming, kayaking, and boating. The nature preserve has three miles of trails for hiking and cross-country skiing. The 6-mile-long Cavlandic Trail connects the park and the city of Cavalier. The park sits adjacent to the Cavalier Country Club, a 9-hole public golf course.

The Gunlogson State Nature Preserve is an arboretum and nature preserve dominated by mature elm and basswood that lies along both banks of the Tongue River. The preserve's many rare species include plants such as the ladyfern, water arum, and two-seeded sedge and animals that include the piliated woodpecker, western wood pewee, and the finescale dace. 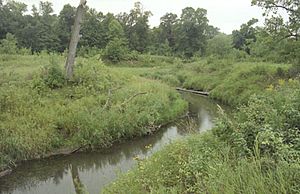 All content from Kiddle encyclopedia articles (including the article images and facts) can be freely used under Attribution-ShareAlike license, unless stated otherwise. Cite this article:
Icelandic State Park Facts for Kids. Kiddle Encyclopedia.