Pembina County is a county located in the U.S. state of North Dakota. At the 2010 Census its population was 7,413. The county seat is Cavalier.

The area along the Pembina and Red rivers was long inhabited by various indigenous peoples. At the time of European contact, the dominant tribe were the Assiniboine and the Lakota (or Sioux, as the French colonists called them). Later the Ojibwe (or Chippewa) migrated into the area from the east and became the dominant tribe. The people had a long trading relationship with French colonists and supported them during the Seven Years' War against Great Britain. By the time of the War of 1812, the Ojibwe were allied with the British against the United States, hoping to forestall or slow European-American settlers' encroaching on their territory. During the first half of the nineteenth century, continuing conflicts between the Lakota and Chippewa along the Red River slowed European-American settlement. The Chippewa pushed the Lakota to the west and became dominant in the area.

The county was created by the 1866–1867 Dakota territorial legislature, and was organized on August 12, 1867. "Pembina" is derived from the Chippewa term for high-bush cranberry, which grew in abundance along the Pembina River. The city of Pembina, the oldest European-American settlement in the state, was the county seat from 1867 to 1911. The seat was relocated to Cavalier.

Cavalier Air Force Station and Icelandic State Park are both located in Pembina County. The first Icelandic immigrant settlement in present-day North Dakota was in Pembina County in the late 1870s, when a colony of settlers from Iceland moved into the county from the New Iceland homesteads near Lake Winnipeg. 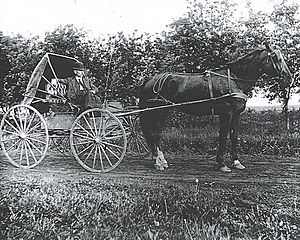 Frontier doctor Dr. Charles Boarman Harris, one of the original pioneers to settle in Pembina, was the first county physician. He delivered over 3,000 babies born in the region between 1882 and 1942.

For thousands of years, various indigenous peoples inhabited the area along the Pembina and Red rivers. At the time of European contact in the 16th century, the dominant tribes were the Assiniboine and the Lakota (or Sioux, as the French colonists called them). The Ojibwe, also known as Chippewa, a branch of the Anishinaabe-speaking language group, gradually migrated west along both sides of the Great Lakes. They developed a long trading relationship with French trappers and colonists. Throughout the Red River of the North area, French trappers married Native American women, and their descendants continued to hunt and trap. A large mixed-race population developed, recognized as an ethnic First Nations group in Canada called the Métis. The Ojibwe and Métis generally supported the French forces during the Seven Years' War in the mid-eighteenth century against Great Britain.

With the British defeat of France and takeover of its colonial territory, the Chippewa learned to deal with a new trading culture. Armed with guns by trading and having adopted the horse from the Mandan and Hidatsa, by the end of the eighteenth century the Chippewa had migrated from woodlands to the Great Plains and begun to push the Lakota west before them. By the time of the War of 1812, the Ojibwe allied with the British against the United States, hoping to forestall European-American settlers' encroaching on their territory. With the settlement of the northern boundary with Canada, the Chippewa within the Dakota Territory were forced to deal with the United States. During the first half of the nineteenth century, the Chippewa had continued conflicts with the Lakota along the Red River, finally pushing them into present-day western North and South Dakota.

Father George Belcourt, a Catholic Jesuit missionary who served them, described their territory in 1849 as the following:

"We understand here, that the district or department called Pembina, comprises all of the country or basin which is irrigated or traversed by the tributaries of the Red River, south of the line of the 49th parallel of latitude. The prairies’ rivers and lakes which extend to the height of land of the Mississippi, and the immense plains which feed innumerable herds of bison to the westward and from which the Chippewa and half breeds [Métis] of this region obtain their subsistence, contains within their limits a country about 400 miles from north to south and more than five hundred miles from east to west."

The Métis used two-wheeled, ox-drawn carts to transport great quantities of furs to market along the Red River Trails, between what is now Winnipeg, Canada and Mendota or St. Paul, Minnesota. They also used the ox-carts to transport food and shelter during extended buffalo hunts.

Over time, the Ojibwe were persuaded to cede much of their land by treaty to the US, which in turn sold it to homesteaders. They moved to relatively small Indian reservations within their earlier territory.

The precursor to Pembina County was a county of the same name in the Minnesota Territory, extending from the Upper Mississippi River to the western boundary of the territory. When Minnesota became a state in 1858, its western boundary was set at the Red River, and the land to its west was unorganized. A new Pembina County was established as part of the Dakota Territory on January 9, 1867. At the time, it was much larger than it is today. In 1871, the county was expanded to include much of the territory in what is now eastern North Dakota from Canada to the South Dakota border.

Between 1873 and 1881, eleven new counties were created from Pembina, including Cass County and Grand Forks County. Pembina took its current form in 1887, when Cavalier County was increased in size.

The first Icelandic settlements in what is now North Dakota were established in Pembina County in the late 1870s. Many of the immigrants came from New Iceland near Lake Winnipeg, along with other Icelanders who moved into the area from colonies in Wisconsin. The new settlers lived primarily in the so-called "Icelandic Townships" of Akra, Beaulieu, Gardar, and Thingwalla. The State Historical Society of North Dakota reported fewer than 3 or 4 non-Icelandic families living there in the early 1900s. Evidence of this heritage is found in several township and city names with Icelandic origins. Akra was named after the town of Akranes, near Reykjavík; Gardar was named for Gardar Svavarsson, who was reportedly the first Scandinavian to visit Iceland; and Hallsson was named for an early settler, Johann P. Hallson.

Icelandic State Park, located in Akra, was established to preserve evidence of this early pioneer heritage.

There were 3,535 households of which 29.8% had children under the age of 18 living with them, 58.2% were married couples living together, 5.3% had a female householder with no husband present, and 33.1% were non-families. 30.5% of all households were made up of individuals and 15.7% had someone living alone who was 65 years of age or older. The average household size was 2.38 and the average family size was 2.98.

All content from Kiddle encyclopedia articles (including the article images and facts) can be freely used under Attribution-ShareAlike license, unless stated otherwise. Cite this article:
Pembina County, North Dakota Facts for Kids. Kiddle Encyclopedia.