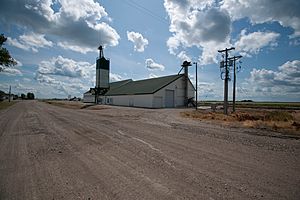 Joliette is an unincorporated community located along Interstate 29 in Joliette Township in Pembina County in the U.S. State of North Dakota. It was established in 1879 as a rural post office. It was settled by French Canadians and named for Joliette, Quebec, the hometown of the town's first settler. Even though it is unincorporated, the post office is still operating and shares the ZIP code of 58271 with the city of Pembina.

Local agribusinesses are served by a BNSF rail line that extends from Grand Forks; however this line has been abandoned north of Joliette since 1980.

All content from Kiddle encyclopedia articles (including the article images and facts) can be freely used under Attribution-ShareAlike license, unless stated otherwise. Cite this article:
Joliette, North Dakota Facts for Kids. Kiddle Encyclopedia.