Pembina is a city in Pembina County, North Dakota, United States. The population was 592 at the 2010 census. Pembina is located 2 miles (3.2 km) south of the Canada–US border. Interstate 29 passes on the west side of Pembina, leading north to the Canada–US border at Emerson, Manitoba and south to the cities of Grand Forks and Fargo. The Pembina-Emerson Border Crossing is the busiest between Blaine, Washington and Detroit, Michigan and the fifth busiest along the Canada-United States border. It is one of three 24-hour ports of entry in North Dakota, the others being Portal and Dunseith. The Emerson-Noyes border crossing, located 2 miles (3.2 km) to the east on the Minnesota side of the Red River, also processed cross border traffic until its closure in 2006.

The area of Pembina was long inhabited by various indigenous peoples. At the time of 16th century French exploration and fur trading, historical American Indian tribes included the Lakota (Sioux, as the French called them), the Chippewa (Ojibwe), and the Assiniboine. The British/Canadian Hudson's Bay Company established a fur-trading post on the site of present-day Pembina in 1797, and it is the oldest European-American community in the Dakotas. The first permanent Anglo-Canadian settlement started in 1812. Until 1823, both the United States (US) and Canada believed the community of Pembina was in Canadian territory. That year United States Army Major Stephen H. Long's survey of the 49th parallel revealed Pembina's location to be just south of the Canada – United States border. In 1851, the US established its first post office in present-day North Dakota in Pembina. Pembina was the most populous place in North Dakota according to the 1860 census. Pembina served as county seat from 1867 to 1911.

Pembina is home to the U.S. satellite plant of Motor Coach Industries, which completes assembly of intercity buses. Its major clients include Greyhound Lines.

The name Pembina is an Ojibwa word for Viburnum edule, a bushy plant with bright red berries which grows in the area. 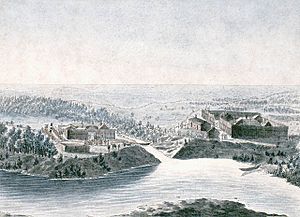 The Pembina area was historically at the borders of the territories of the Lakota, the Chippewa, and the Assiniboine, American Indian tribes, who competed for hegemony. Their conflict increased beginning with the French introduction of firearms in the late 17th century as part of their goods traded for furs. The first known European visitors to the Pembina region were the French La Vérendrye family in the early 18th century.

Pembina's recorded history of European encounter extended for more than 200 years. Started by the French as a fur trading post for commerce with the American Indians, it was also tied to trade for American Bison. European trappers who hunted in the Red River of the North area frequently married Indian women and often lived with local tribes at least part of the year. Their mixed-race descendants became part of their hunting and trapping culture, and formed the later ethnic group recognized in Canada as Métis people.

The settlement was associated with the histories of French Canada, the North West Company (NWC). the Hudson's Bay Company (HBC), the Red River Colony, Battle of Seven Oaks, the Red River Rebellion, Assiniboia, and Manitoba. Through much of the nineteenth century, Métis families used the two-wheeled Red River ox cart trains to travel into the Great Plains, where the men would hunt bison and women would process the meat, skins, and bones. All parts were used for clothing, tepees, etc. Their regular trade routes became known as the Red River Trails. This area was part of the United States' Dakota and Minnesota territories; and Canada–US border politics. 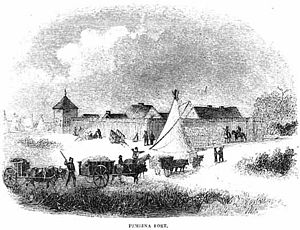 Due to the unrest among American Indians of the Red River Valley after the American Civil War, the Minnesota Legislature petitioned Congress to build a fort, especially to defend against incursions by the Lakota (Sioux), some of whom had migrated to Canada to evade the US Army.

As a result, Major General Winfield Scott Hancock recommended the establishment of the post on December 8, 1869; Fort Pembina was completed on July 8, 1870. Located a mile and a half south of the settlement, it was just above the mouth of the Pembina River. It was originally called Fort Thomas, for Major General George H. Thomas, who died on March 28, 1870. The post was designated Fort Pembina on September 6, 1870. Seriously damaged by fire on May 27, 1895, it was abandoned on August 16, 1895. It was later sold at public auction.

The noted American author Louise Erdrich has represented the Pembina River and the Pembina Band of the Ojibwe Indians on the Turtle Mountain Reservation in numerous works of fiction. In the past several books, the Pembina have celebrated their unique heritage.

Despite its small size, Pembina maintained a television station, KCND-TV, from 1960 to 1975. The station was a border blaster primarily targeting Winnipeg from as close to the border as possible; when simultaneous substitution rules took effect in the early 1970s, Canadian interests bought the intellectual property of the station and relocated it to Winnipeg, where it was relicensed by the Canadian government as CKND-TV and has operated there ever since.

Its population in federal censuses has not exceeded 1,000.

According to the United States Census Bureau, the city has a total area of 0.77 square miles (1.99 km2), all of it land. 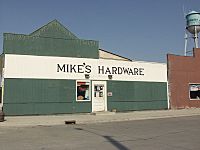 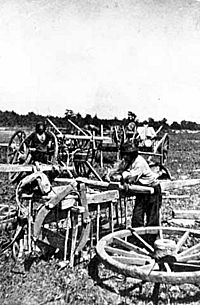 There were 237 households of which 29.1% had children under the age of 18 living with them, 57.4% were married couples living together, 5.1% had a female householder with no husband present, 3.4% had a male householder with no wife present, and 34.2% were non-families. 30.8% of all households were made up of individuals and 10.1% had someone living alone who was 65 years of age or older. The average household size was 2.50 and the average family size was 3.17.

There were 250 households out of which 35.2% had children under the age of 18 living with them, 62.8% were married couples living together, 5.2% had a female householder with no husband present, and 28.8% were non-families. 26.8% of all households were made up of individuals and 11.2% had someone living alone who was 65 years of age or older. The average household size was 2.57 and the average family size was 3.12.

All content from Kiddle encyclopedia articles (including the article images and facts) can be freely used under Attribution-ShareAlike license, unless stated otherwise. Cite this article:
Pembina, North Dakota Facts for Kids. Kiddle Encyclopedia.