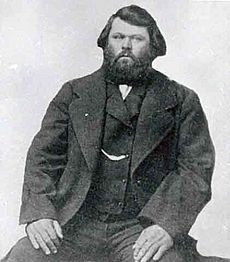 Walhalla was established in 1845. Walhalla is the second oldest town in North Dakota, its history bound up in the fur trade of the Red River Valley. One mile northeast of town is the North West Company fur trading post, established in 1797 by David Thompson, and in 1801 moved to a site one mile east of Walhalla, where a reconstructed building is now located.

Also about one mile northeast of Walhalla is the Gingras Trading Post, established in the 1840s by the Métis legislator and businessman Antoine Blanc Gingras.

In town is the Kittson Trading Post, established by Norman Kittson, an American Fur Company agent, in 1843. This is the oldest building in North Dakota. It is located in the Walhalla State Historical Park and is preserved by the State Historical Society.

The Great Northern Railway arrived in Walhalla in 1898.

The town was the site of a protest against TransCanada's Keystone Pipeline in October 2016, when documentarian Deia Schlosberg was arrested.

There were 439 households, of which 26.9% had children under the age of 18 living with them, 48.1% were married couples living together, 5.9% had a female householder with no husband present, 5.9% had a male householder with no wife present, and 40.1% were non-families. 36.4% of all households were made up of individuals, and 16.8% had someone living alone who was 65 years of age or older. The average household size was 2.21 and the average family size was 2.88.

This climatic region is typified by large seasonal temperature differences, with warm to hot (and often humid) summers and cold (sometimes severely cold) winters. According to the Köppen Climate Classification system, Walhalla has a humid continental climate, abbreviated "Dfb" on climate maps.

All content from Kiddle encyclopedia articles (including the article images and facts) can be freely used under Attribution-ShareAlike license, unless stated otherwise. Cite this article:
Walhalla, North Dakota Facts for Kids. Kiddle Encyclopedia.