Kittson County is a county located in the U.S. state of Minnesota along the Canada–US border. As of the 2010 census, the population was 4,552. Its county seat is Hallock. It is named after Canadian fur trader and railroad entrepreneur Norman Kittson. The county was officially organized on February 25, 1879, having been part of the Pembina District prior to that time. The county also included the western portion of what is now Roseau County until 1894.

Skull Lake is Kittson County's only natural lake. Lake Bronson, for which the city of Lake Bronson takes its name, is man-made.

Kittson County is south from the Canadian province of Manitoba.

The county is named after Norman W. Kittson, an early fur trader and partner of the American Fur Company. He increased the fur trading traffic significantly by increasing the use of oxcarts. He was also responsible for the pioneering of the steamboat in the Red River and was active with James J. Hill in the development of the railroad. His contributions played an important role in the settlement of the county.

Evidence of occupation dating back 1800 years has been confirmed through archaeological expeditions done in the 1930s and the 1970s around the burial mounds that are located on the sand ridges in the eastern part of the county. These mounds date back to the Woodland Period. Evidence has been found that the Laurel, Arvilla, St. Croix & Blackduck complexes were the early occupants of the county. However, approximately 400 years ago, the Cree, Assiniboine, Sioux and Ojibway inhabited the county.

The early explorers of the region were the fur traders. Pembina, North Dakota's oldest settlement, which was located just across the Red River of the North, dates its beginning to 1797 when the first trading post was established by Charles Baptiste Chaboillez of the Northwest Fur Company. The Hudson Bay and the American Fur Companies were also situated in Pembina as the fur trading industry increased. The fur traders and voyageurs traveled on the eastern side of the Red, which eventually would be Kittson County. Alexander Henry the younger, who erected a fort for the North West Company in Pembina, is considered to be the first white man to test agriculture in the valley. Joe Rolette, who started a fur post for the American Fur Company in Pembina, and Norman W. Kittson, were two "explorers" that predominately opened this area by developing the Red River Ox Cart trails and broadening the use of the ox carts. The need for the ox carts diminished as the steamboats became the new mode for transporting furs and supplies, Eventually, the steamboats were replaced by the railroad.

St. Vincent, which is located directly across the Red River from Pembina, was settled in 1857. With rumors of a railroad coming through, settlers moved across the river from Pembina to stake their claims. Many of these early settlers were Métis, a mixture of native and naturalized North Americans, Nearly twenty years later, in 1878, the St. Paul & Pacific Railroad line finally reached St. Vincent and opened up the area to settlement. This railroad extended through the western portion of the county. The communities of Donaldson, Kennedy, Hallock, Northcote, Humboldt and St. Vincent were established along this line. It wasn't until the early 1900s when the eastern portion of the county was settled. The Soo Line railroad was completed in 1904 and the communities of Karlstad, Halma, Bronson, Lancaster, Orleans and Noyes were established. Scandinavians, Ukrainians, Polish, Scottish, Irish, English, Germans, French Canadians and Métis all contributed to Kittson County's "melting pot."

There are currently three sites in the county that are listed in the National Register of Historic Places. They include the St. Nicholas Orthodox Church, located in Caribou Township, the burial mounds referred to as the "Lake Bronson Site" which is located in Norway & Percy Twps. and the Lake Bronson State Park WPA/Rustic Style Historic Resources which include an observation tower and several buildings. The Lake Bronson State Park also has interpretive sites for the tower, a pioneer cemetery and the WPA camp.

Kittson County was once part of glacial Lake Agassiz. Evidence of this prehistoric lake can still be seen in the topography of the county today. Remnants of "McCauleyville Beach" of Lake Agassiz, can be found on the eastern portion of the county. This is an area of sandy soil and sand ridges. Other evidence of the glacier and Lake Agassiz is the approximately 140' drop in elevation from the eastern portion of the county to the western part, near the Red River. This is where one can find the black, rich soil that the Red River Valley is famous for. 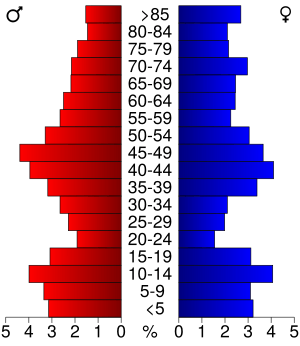 All content from Kiddle encyclopedia articles (including the article images and facts) can be freely used under Attribution-ShareAlike license, unless stated otherwise. Cite this article:
Kittson County, Minnesota Facts for Kids. Kiddle Encyclopedia.