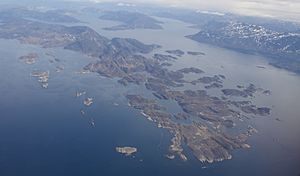 Aerial view of Sallersuaq island and skerries at the mouth of Ikertooq Fjord.

The fjord initially flows westward, to then turn west-south-west between the mainland peninsula in the south, and Sarfannguit Island in the north, widening considerably at its mouth at approximately 66°46′N 53°27′W﻿ / ﻿66.767°N 53.450°W﻿ / 66.767; -53.450, where it empties into Davis Strait. The fjord is unusual in that it connects through a very narrow waterway to the head of the narrower Amerloq Fjord near the village of Sarfannguit.

The northern inlet at the fjord head is surrounded by tall mountains immediately to the south of the Pingu mountain group halfway between Davis Strait and the Greenland ice sheet (Greenlandic: Sermersuaq). The range flattens considerably towards the east in the area of Kangaamiut dike swarm north of Kangerlussuaq, due to pressure exerted by the icesheet for long periods in the past.

The small Sarfannguit settlement occupies the eastern promontory on Sarfannguit Island, on the northern shore of the fjord, at the narrow waterway between the mainland and Sarfannguit Island. In the past, the coastal region was dotted with several small villages, all of which are now abandoned.

All content from Kiddle encyclopedia articles (including the article images and facts) can be freely used under Attribution-ShareAlike license, unless stated otherwise. Cite this article:
Ikertooq Fjord Facts for Kids. Kiddle Encyclopedia.