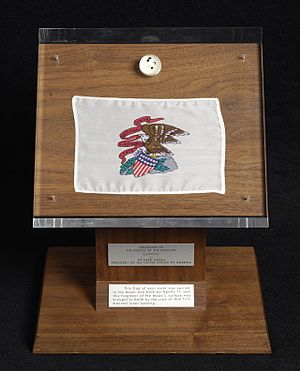 The Illinois lunar sample displays are two commemorative plaques consisting of small fragments of Moon specimen brought back with the Apollo 11 and Apollo 17 lunar missions and given in the 1970s to the people of Illinois by United States President Richard Nixon as goodwill gifts.

The Illinois Apollo 11 lunar sample display commemorative plaque consists of four "Moon rock" rice-size particle specimens that were collected by Apollo 11 astronauts Neil Armstrong and Buzz Aldrin in 1969 and a small Illinois state flag that was taken to the Moon and back on Apollo 11.

The four charcoal-gray "Moon rocks" range in size from 1.5 to 3 millimeters (1/16 to 1/8 inch) and weigh about 50 mg total. They are encased in a clear plastic button the size of a coin which is mounted to a wooden board approximately one foot square on a small podium pedestal display. The small podium plaque display also has mounted on it a small Illinois flag that had been taken to the Moon and back, which lies directly below the "Moon rocks", and a formal message from President Richard Nixon stating that it is a gift to the people of the state of Illinois. Similar lunar sample displays were also distributed to all the other states of the United States and all the countries of the world at the time. 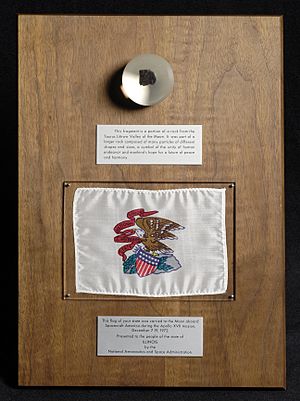 The Illinois Apollo 17 lunar sample display commemorative style plaque, measuring 10 by 14 inches, consists of one "Moon rock" particle specimen that was cut from lunar basalt 70017 and an Illinois state flag. The basalt 70017 was collected by Apollo 17 astronaut Harrison Schmitt on the Moon in 1972. Once lunar basalt 70017 was brought back to Earth from the Moon, the basalt Moon rock was cut up into small fragments of approximately 1 gram. The specimen was encased in a plastic ball and mounted on the wooden plaque along with the Illinois state flag which had been taken to the Moon and back by the crew of Apollo 17. The plaque was then distributed in the 1970s by President Richard Nixon to the people of Illinois as he did for the Apollo 11 plaque display gifts. This was done as a goodwill gesture to promote peace and harmony.

While other "goodwill Moon rocks" commemorative displays were reported lost or missing by many recipient states, both the Illinois Apollo 11 and Apollo 17 "goodwill Moon rocks" commemorative plaque displays were kept at the Illinois State Museum. Both were on public display until about 1990. They were then removed and put away in a cabinet. For about 10 years the public did not see the displays, but during that time they were brought for viewing to a Research and Collections Center in Springfield and to various gem, mineral, and rock shows. In 2010 a student from the University of Phoenix investigated the whereabouts of the "goodwill Moon rocks" as an assignment in investigative techniques. Because of her tenacity, the Illinois State Museum put the displays back on public exhibition that year.

All content from Kiddle encyclopedia articles (including the article images and facts) can be freely used under Attribution-ShareAlike license, unless stated otherwise. Cite this article:
Illinois lunar sample displays Facts for Kids. Kiddle Encyclopedia.