Independence is a small unincorporated community in Warren Township, Warren County, in the U.S. state of Indiana.

A trading post existed at this location as early as 1811. The village was laid out on October 5, 1832 by Zachariah Cicott, a French-Indian trader and scout for General William Henry Harrison, on Cicott's Reserve, ground that was given to him by the government for his services. A post office was established on March 24, 1834 and closed on January 31, 1950. Now the town uses the post office in nearby Attica, despite the fact that Attica is in a different county.

The first newspaper in the county was produced in Independence, starting in 1844. It was called the Wabash Register and was run by Enos Canutt.

Independence is located in the eastern part of the county on the western banks of the Wabash River, about 7 miles (11 km) northeast and upstream of the county seat of Williamsport. The small town of Riverside occupies the opposite bank, which is in Fountain County. 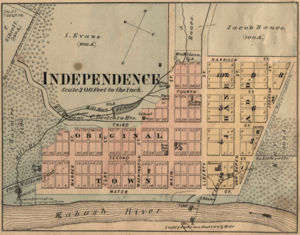 All content from Kiddle encyclopedia articles (including the article images and facts) can be freely used under Attribution-ShareAlike license, unless stated otherwise. Cite this article:
Independence, Indiana Facts for Kids. Kiddle Encyclopedia.