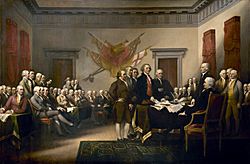 The word independence means "not dependent", or not having to depend on anyone or anything else. It also means being strong and able to survive alone. Anything can be dependent or independent. When people talk about independence, it may be about people or countries, where it is often being spoken about as a good thing. For places, it may mean sovereignty or autonomy. In science, as in independent variable the word does not mean it's good or bad. 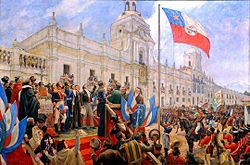 Chile, one of several Spanish colonies in South America, issued a Declaration of independence in 1818

Singapore gained independence from Malaysia in 1965. The newest country to get its independence was South Sudan. Other countries that became independent not long ago are Bosnia and Herzegovina in 1992, Eritrea in 1993 and East Timor in 2002. However, some countries have political parties that discuss whether their country should become independent. Some examples of these are the Scottish National Party (SNP) or the Puerto Rican Independence Party (PIP).

All content from Kiddle encyclopedia articles (including the article images and facts) can be freely used under Attribution-ShareAlike license, unless stated otherwise. Cite this article:
Independence Facts for Kids. Kiddle Encyclopedia.