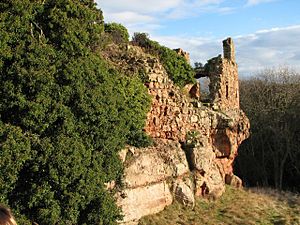 Innerwick Castle is a ruined castle in East Lothian, Scotland, near the village of Innerwick, 5 miles (8.0 km) from Dunbar, on the Thornton Burn, and overlooking Thornton Glen.

The castle, built in the 14th century on "the edge of a precipitous glen", was a stronghold of the Stewarts and of the Hamilton family.

It was besieged in 1406 by Robert Stewart, Duke of Albany to expel the forces of the Earl of Northumberland. Several timber beams were bought for the assault, perhaps to make a siege engine or effect access.

In November 1542 the English Somerset Herald, Thomas Trahern was murdered near Dunbar and his companion Henry Ray, Berwick Pursuivant found a refuge at Innerwick Castle. Sir James Hamilton of Innerwick and twenty of his servants recovered the body of the English herald and buried him at Dunbar church, and he sent a surgeon to look after the Trahern's servant or "boy".

The castle was extended several times, but was captured and destroyed by Edward Seymour, 1st Duke of Somerset in 1548 during the "rough wooing". Both Innerwick and Thornton castles had been of strategic importance for guarding routes from the south.

In April 1584 the laird of Innerwick was commanded to surrender the castle to the crown. The keepers of Tantallon and Fast Castle received the same instruction.

In the 1590s Alexander Hamilton laird of Innerwick employed the Edinburgh tailor Patrick Nimmo, who kept a record of the clothes he made for the laird, his wife Christian, (a daughter of Thomas Hamilton of Priestfield), and their sons and daughters. Elspeth Hamilton had a gown of shot or changing silk "burret" with stuffed sleeves, Jean had winter gowns of woollen fabrics. His son, Alexander Hamilton of Fenton, had a purple fustian doublet and breeches with a green cloak and a Spanish felt hat in 1599.

David Calderwood mentions Margaret Whitelaw, Lady of Innerwick, who divorced Alexander Hamilton of Innerwick and remarried to Sir John Ker of Littledean, and died in 1627. She died in torment, and was said to have practised witchcraft and consulted with witches.

A later owner James Maxwell of Innerwick became Earl of Dirleton, and the land around the castle was sold to the Nisbets in 1663.

In the 17th Century Innerwick Castle was in good enough repair that it was used as a base, along with Dirleton and Tantallon, by the Covenanters to harass Oliver Cromwell’s lines of communication during the Wars of the Three Kingdoms.

Innerwick Castle stands within the Barony of Innerwick. The most recent Baron of Innerwick was Colonel Victor Charles Vereker Cowley of Crowhill (1918–2008). Currently, Thornton Glen is part of the Crowhill Estate and is managed by the Scottish Wildlife Trust. The glen is considered important for the presence of ferns that are rare in Scotland. The remains of the castle are on top of a crag which is popular with climbers.

All content from Kiddle encyclopedia articles (including the article images and facts) can be freely used under Attribution-ShareAlike license, unless stated otherwise. Cite this article:
Innerwick Castle Facts for Kids. Kiddle Encyclopedia.