Kids Encyclopedia Facts
Not to be confused with Institute for Historical Review, an American Holocaust denial organisation.

The Institute of Historical Research (IHR) is a British educational organisation providing resources and training for historical researchers. It is part of the School of Advanced Study in the University of London and is located at Senate House. The Institute was founded in 1921 by A. F. Pollard.

The IHR was founded in 1921 by British historian Albert Pollard. Appointed Professor of Constitutional History at University College London in 1903, his inaugural address, a year later, argued for the need for a postgraduate school of historical research. With a generous and anonymous donation of £20,000 from Sir John Cecil Power in 1920 towards the founding of the institute, Pollard's dream was realised. The Institute was formally opened by H. A. L. Fisher on 8 July 1921.

The IHR was directly administered by the Senate of the University of London, rather than being part of one of the federal colleges. It was the first organisation to be administered under such an arrangement, and as such provided the model for other Institutes, many of which later joined the IHR in the University of London's School of Advanced Study.

The IHR's first premises were in "temporary" huts on Malet Street, on a site now occupied by Birkbeck College. Despite the supposedly temporary nature of this accommodation, the IHR was not to move until 1947, when it took up residence in the north block of Senate House. The new location was built by architect Charles Holden, along with the rest of the University, at a projected cost of £3,000,000 and duration of 30 years for the whole project. Still occupying this position, many rooms in the IHR overlook the grass lawn in between Senate House and SOAS, which is where Senate House's unbuilt fourth court would have been.

With the start of World War II in September 1939 the Institute's work and construction of its permanent building were disrupted, with the Ministry of Information occupying Senate House, and closing the Institute in May 1940. The IHR was struck by a bomb on the night of 22–23 September 1940. The impact resulted in "the destruction of six books and almost the entire collection of London maps, as well as of furniture".

The IHR's role comprises the following:

To promote the study of history and an appreciation of the importance of the past among academics and the general public, in London, in Britain and internationally, and to provide institutional support and individual leadership for this broad historical community

To offer a wide range of services which promote and facilitate excellence in historical research, teaching and scholarship in the UK, by means of its library, seminars, conferences, fellowships, training and publications (both print and digital)

To provide a welcoming environment where historians at all stages in their careers and from all parts of the world can meet formally and informally to exchange ideas and information, and to bring themselves up to date with current developments in historical scholarship

In order to fulfill its role as defined above, the IHR maintains different academic institutions, such as a library, the seminar programme as well as several integrated bodies and programmes. It also publishes the results of historical research.

From the beginning the founders of the Institute of Historical Research envisaged a combination of scholarship and library. This tradition is continued in that the seminars still take place in the rooms of the library. The library itself (its collection policy unaltered since the its foundation) collects sources for the History of Western Europe and areas affected by the European expansion. It now contains roughly 190,000 volumes. There are sizable holdings for the British Isles, as well as for Germany, Austria, France, the Low Countries, Italy, Spain, Portugal, Latin America, the US and colonial history, ecclesiastical, Byzantine and crusader history as well as small holdings for Eastern Europe, Switzerland and Scandinavia. The library is particularly good for sources on local history both of the British Isles and Europe. It contains the largest collection of Low Countries material outside of those countries (due to gifts from the Netherlands and research interests of scholars working there), the most complete collection of French cartularies outside France as well as collections of poll books for the United Kingdom and a complete run of the Victoria County History books.

The collections have been supplemented by donations and bequests from many different scholars, such as the Wright collection (currently being integrated into the library holdings). In its early years the IHR library was built up by actively seeking donations, and much of the collection was formed from bequests and gifts by individuals and organisations. By 1926, three-quarters of the collection had been acquired through private benefactions and presentations by governments from Europe and other parts of the World. The accessions records highlight the collaborative nature of library collection development; many donations were shared between the IHR and other libraries to build on existing collection strengths or through an agreed division of collection policy. As an example, the sizable portion of the IHR’s colonial and early national holdings in the United States collection was donated to the library by the widow of George Louis Beer between 1921 and 1925. 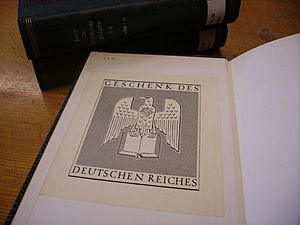 Among the IHR’s extensive collection of books on European history are a set of volumes of the Monumenta Germaniae Historica donated to the University of London by the Nazi government of Germany in 1937. The presentation was made by Joachim von Ribbentrop, Germany’s ambassador to Britain. These books retain their original bookplates marking them as a "Gift of the German Reich".

James Bavington Jeffreys, a student at the LSE at the time, wrote an account of the attempt by University of London students to block the donation. Jeffreys attempted to rally support against the donation from the History teaching staff at the LSE. Among the staff he spoke to were Sir Charles Webster and Richard Tawney, but he was unable to raise any support amongst the academics against the donation. Eventually it was left to the students themselves to make a stand. Around fifty students gathered outside Senate House, and demonstrated as Ribbentrop arrived to make the donation. Jeffreys noted: "…more than one college of the University was represented, to show it was not just the 'left-wingers' of the LSE".

The IHR supports and promotes a wide variety of seminars. They are accessible to all interested in the topic under discussion. Seminar topics range from the Early Middle Ages to Modern Britain, from the history of gardening to the philosophy of history.

The IHR is also involved with organising and running a number of conferences. The annual Anglo-American Conference of Historians, normally held in July, is the largest; but there are also many others throughout the year.

The IHR co-manages British History Online, a digital library of key printed primary and secondary sources for the history of Britain and Ireland, with a primary focus on the period between 1300 and 1800.

The IHR publishes Historical Research, a scholarly historical journal. The journal first appeared in 1923 under the title Bulletin of the Institute of Historical Research; and the present title was adopted in 1987 (beginning with volume 60, no. 141).

The IHR publishes the online journal Reviews in History. The journal was launched in 1996, and publishes reviews and reappraisals of significant work in all fields of historical interest.

Besides the core activities, two research centres are integrated into the Institute. These are:

All content from Kiddle encyclopedia articles (including the article images and facts) can be freely used under Attribution-ShareAlike license, unless stated otherwise. Cite this article:
Institute of Historical Research Facts for Kids. Kiddle Encyclopedia.