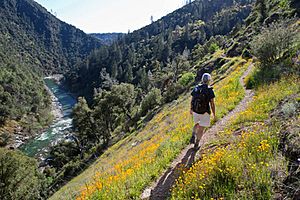 The Historic Stevens Trail connected the town of Iowa Hill with the city of Colfax, California. It is now a popular hiking trail, extending 4.5 miles along the North Fork of the American River.

Iowa Hill (formerly, Iowa City) is an unincorporated community in Placer County, California. The town is located 6.5 miles northwest of Foresthill 9 miles east of Colfax and 58 miles northeast of Sacramento. It lies at an elevation of 2861 feet. The community relies completely upon solar panels and generators for power. Population is around 200 people. Iowa Hill Road claims a small handful of lives every decade, and along with its "off grid" status, prevents the town from growing in population. The community boasts many hardcore cyclists and is appealing to visitors due to the abundance of recreational opportunities.

Iowa Hill Road is a very steep, one-lane, winding road embedded within the mountains. There are no safety guardrails. Since ambulance service from Colfax takes a long time, emergency medical transport is supplemented by CALSTAR, the area's air rescue helicopter. A landing pad is located next to the town fire house.

Locals are regularly spotted out and about the town and North Fork of the American River. Popular activities are hiking, cycling, swimming, whitewater rafting, kayaking, gold panning/mining and fishing. About 50% of the town's homes are vacation homes. The community relies solely on solar panels and generators for power since Iowa Hill is not connected to the electrical grid. Mail service is three times per week. The Iowa Hill Store acts as a restaurant, bar, post office and ultra mini-market.

Iowa Hill enjoys a small but significant cult following of outdoor enthusiasts. Within 5 miles of town is the North Fork of the American River and the Mineral Bar Campground, Sugar Pine Reservoir recreation area, and numerous trails including the famous Stevens Trail between Colfax and Iowa Hill. The Mineral Bar Campground is part of the Auburn State Recreation Area, a State Park managed by the Bureau of Reclamation, which began charging for parking in 2013. Stevens Trailhead remains free to park. It begins adjacent the Iowa Hill Store spanning all the way to Colfax, crossing the North Fork in between.

In 1851 or 1852, miners from Iowa discovered gold here. The Iowa City post office opened in 1854. Stores, breweries, saloons, fraternal lodges, homes, a church, school, and Temperance Hall are examples of businesses thriving in Iowa Hill in the mid-1850s. The town was producing about one hundred thousand dollars per week in gold in 1867. In 1901, the post office changed its name to Iowa Hill. In 1920 a fire took hold that virtually destroyed the town. What remains is an old Wells Fargo vault, the old fire house, a couple of other old buildings, and two cemeteries. Iowa Hill is now registered as California Historical Landmark #401.

There are dozens of famous gold mines in the area, including "Big Dipper" and "Gleason"

Frank Norris wrote a short story in 1903 titled The Wife of Chino about local miners who went into town to use the Iowa Hill Post Office.

This region experiences variances in weather. Winter generally produces as much as 1–2 feet of snow with temperatures as low as 15 Degrees. Summers vary between 87-104 Degrees. According to the Köppen Climate Classification system, Iowa Hill has a hot summer Mediterranean climate, abbreviated "Csa" on climate maps.

All content from Kiddle encyclopedia articles (including the article images and facts) can be freely used under Attribution-ShareAlike license, unless stated otherwise. Cite this article:
Iowa Hill, California Facts for Kids. Kiddle Encyclopedia.