The Irish Jewish Museum (Irish: Músaem Giúdach na hÉireann) is a small museum located in the once highly Jewish populated area of Portobello, around the South Circular Road, Dublin 8, dedicated to the history of the Irish Jewish community.

The museum was opened in June 1985 by Chaim Herzog who was then president of Israel and was born in Ireland. The museum is in a former Synagogue built in 1917 in two adjoining terraced houses on Walworth Road, off the South Circular Road. The surrounding area, known as Portobello, was previously a Jewish area, however the large scale emigration that affected Ireland in the 1950s had a particularly strong effect on the Jewish population; during this period there was a migration to the suburbs and Dublin's main synagogue shifted to Terenure. The synagogue is preserved, there are artifacts on display, and the museum houses genealogical records.

The museum contains a substantial collection of memorabilia relating to the Irish Jewish communities and their various associations and contributions to present day Ireland. The material relates to the last 150 years and is associated with the communities of Belfast, Cork, Derry, Drogheda, Dublin, Limerick and Waterford. 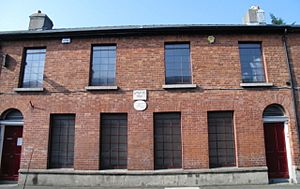 The museum is divided into several distinct areas. In the entrance area and corridors there is a display of photographs, paintings, certificates and testimonials. The ground floor contains a general display relating to the commercial and social life of the Jewish community. A special feature adjoining the area is the kitchen depicting a typical Sabbath/Festival meal setting in a Jewish home in the late 19th/early 20th century in the neighbourhood.

Upstairs, the original Synagogue, with all its ritual fittings, is on view and also the Harold Smerling gallery containing Jewish religious objects.

In 2005, the museum was sprayed several times with anti-Semitic slogans. Minister for Foreign Affairs Dermot Ahern visited the museum to express Government support for the museum and the Jewish community. Ahern's actions were praised by Israeli Foreign Minister Silvan Shalom. The culprit was identified from CCTV images and arrested. At trial, his lawyers stated that the attacks were a result of his ongoing schizophrenia and he was sentenced to six months of probation. Raphael Siev, curator of the museum, said the attacks had caused "great terror" and "great upset" but the trial judge prevented him from continuing, citing the uncertain legal status of victim impact statements in cases of this sort.

All content from Kiddle encyclopedia articles (including the article images and facts) can be freely used under Attribution-ShareAlike license, unless stated otherwise. Cite this article:
Irish Jewish Museum Facts for Kids. Kiddle Encyclopedia.