The Irish Wolfhound is a historic sighthound dog breed from Ireland that has by its presence and substantial size inspired literature, poetry and mythology.

Like all sighthounds, it was used to pursue game by speed, it was also famed as a guardian dog, specializing in protection against and for the hunting of wolves. 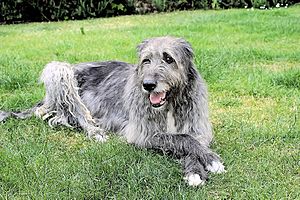 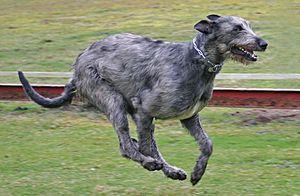 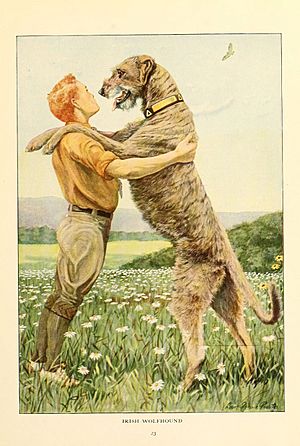 National Geographic illustration showing the great size of the breed.

In 391 AD there is a reference to large dogs by Quintus Aurelius Symmachus, a Roman Consul who received seven "canes Scotici" as a gift to be used for fighting lions and bears, and who wrote "all Rome viewed (them) with wonder". Scoti is a Latin name for the Gaels (ancient Irish). Dansey, the early 19th century translator of the first complete version of Arrian's work in English, On Coursing, suggested the Irish and Scottish "greyhounds" were derived from the same ancestor, the vertragus, and had expanded with the Scoti from Ireland across the Western Isles and into what is today Scotland.

The dog-type is imagined by some to be very old. Wolfhounds were used as hunting dogs by the Gaels. Dogs are mentioned, as cú in Irish laws and in Irish literature which dates from the 6th century or, in the case of the Sagas, from the old Irish period - AD 600-900. The word "Cú" often became an added prefix of respect on the names of warriors as well as kings denoting that they were worthy of the respect and loyalty of a Cú. CúChulainn, the name of a legend, which translates literally as "hound of Culann", gained his name as a child, known then as Sétanta, he slew the ferocious guard dog of Culann, forcing him to offer himself as a replacement. In discussing the systematic evidence of historic dog sizes in Ireland, the Irish zooarchaeologist Finbar McCormick stressed that no dogs of Irish Wolfhound size are known from sites of the Iron Age period of 1000 BC through to the early Christian period to 1200 AD, and on the basis of the historic dog bones available, dogs of current Irish Wolfhound size seem to be a relatively modern development – It must be concluded that the dog of CúChulainn was no larger than an alsatian and not the calf-sized beast of the popular imagination … 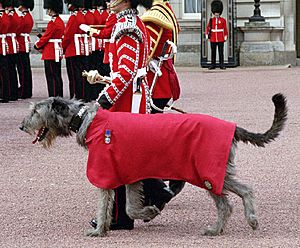 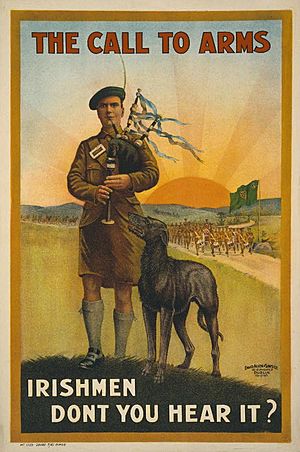 Hunting dogs were coveted and were frequently given as gifts to important personages and foreign nobles. King John of England, in about 1210 presented an Irish hound , Gelert, to Llewellyn, a prince of Wales. The poet The Hon William Robert Spencer immortalized this hound in a poem.

In his History of Ireland completed 1571, Edmund Champion gives a description of the hounds used for hunting wolves in the Dublin and Wicklow mountains. He says: "They (the Irish) are not without wolves and greyhounds to hunt them, bigger of bone and limb than a colt". Due to their popularity overseas many were exported to European royal houses leaving numbers in Ireland depleted. This led to a declaration by Oliver Cromwell himself being published in Kilkenny on 27 April 1652 to ensure that sufficient numbers remained to control the wolf population.

The early 18th century engraving from Entwurf einiger Thiere by Johann Elias Ridinger is the oldest known image of the original wolfdog. References to the Irish Wolfhound in the 18th century tell of its great size, strength and greyhound shape as well as its scarcity. Writing in 1790, Bewick described it as the largest and most beautiful of the dog kind; about 36 inches high, generally of a white or cinnamon colour, somewhat like the Greyhound but more robust. He said that their aspect was mild, disposition peaceful, and strength so great that in combat the Mastiff or Bulldog was far from being an equal to them.

The last wolf in Ireland was killed in Co. Carlow in 1786. It is thought to have been killed at Myshall, on the slopes of Mount Leinster by a pack of wolfdogs kept by a Mr Watson of Ballydarton. The wolfhounds that remained in the hands of a few families who were mainly descendants of the old Irish chieftains were now symbols of status rather than used as hunters, and these were said to be the last of their race.

Thomas Pennant (1726-1798) reported that he could find no more than three wolfdogs when he visited Ireland. During the 1836 meeting of the Geological Society of Dublin, Dr. Scouler presented the "Notices of Animals which have disappeared from Ireland", with the wolfdog mentioned. 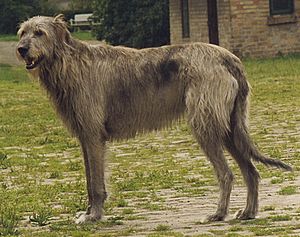 Considered by the American Kennel Club to be the tallest of all dog breeds, describing the breed as, "Of great size and commanding appearance, the Irish Wolfhound is remarkable in combining power and swiftness with keen sight. The largest and tallest of the galloping hounds, in general type he is a rough-coated, Greyhound-like breed; very muscular, strong though gracefully built; movements easy and active; head and neck carried high, the tail carried with an upward sweep with a slight curve towards the extremity". The average height of an Irish Wolfhound should be taller than that of a Great Dane. However, the wolfhound is not to be confused with being the heaviest, as its structure should be similar to that of a Greyhound, with a very broad and deep chest that tucks up.

Its colour may be grey, brindle, red, black, white, fawn, and wheaten.

The AKC specifies the minimum height as 32 inches (81 cm) for mature males, 30 inches (76 cm) for females; the minimum weight: 120 pounds (54 kg) for males, 105 pounds (48 kg) for females. It is not rare to see modern day female hounds reaching the minimal height requirements of those of male hounds; most females are well over 30 inches (76 cm) and in most AKC conformation shows a wolfhound’s height is looked at with as much importance as the hound’s head and face structure. Per the AKC, great size, including height of shoulder and proportionate length of body is to be aimed at, to firmly establish a breed averaging 32–34 inches (81–86 cm) in males. The height/weight standards in Ireland and England are slightly different: males 79 centimetres (31 in)/54.5 kilograms (120 lb), females 71 centimetres (28 in)/40.9 kilograms (90 lb). 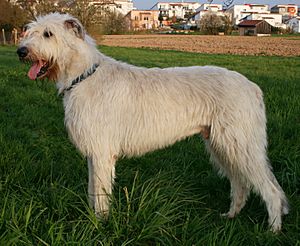 An Irish Wolfhound with cream coat.

Irish Wolfhounds have a varied range of personalities and are most often noted for their personal quirks and individualism. An Irish Wolfhound, however, is rarely mindless, and despite its large size is rarely found to be destructive in the house or boisterous. This is because the breed is generally introverted, intelligent, and reserved in character. An easygoing animal, the Irish Wolfhound is quiet by nature.

Wolfhounds often create a strong bond with their family and can become quite destructive or morose if left alone for long periods of time. An Irish Wolfhound is not a guard dog and will protect individuals rather than the house or the owner’s possessions. However independent the wolfhound is, the breed becomes attached to both owners and other dogs they are raised with and is therefore not the most adaptable of breeds. Bred for independence, an Irish Wolfhound is not necessarily keen on defending spaces. A wolfhound is most easily described by its historical motto, “gentle when stroked, fierce when provoked”.

They should not be territorially aggressive to other domestic dogs but are born with specialized skills and it is common for hounds at play to course another dog. This is a specific hunting behavior, not a fighting or territorial domination behavior. Most Wolfhounds are very gentle with children. The Irish Wolfhound is relatively easy to train. They respond well to firm, but gentle, consistent leadership. However, historically these dogs were required to work at great distances from their masters and think independently when hunting rather than waiting for detailed commands and this can still be seen in the breed.

Irish Wolfhounds are often favored for their loyalty, affection, patience and devotion. Although at some points in history they have been used as watchdogs, unlike some breeds, the Irish Wolfhound is usually unreliable in this role as they are often friendly toward strangers, although their size can be a natural deterrent. However, when protection is required this dog is never found wanting. When they or their family are in any perceived danger they display a fearless nature. Author and Irish Wolfhound breeder Linda Glover believes the dogs' close affinity with humans makes them acutely aware and sensitive to ill will or malicious intentions leading to their excelling as a guardian rather than guard dog.

All content from Kiddle encyclopedia articles (including the article images and facts) can be freely used under Attribution-ShareAlike license, unless stated otherwise. Cite this article:
Irish wolfhound Facts for Kids. Kiddle Encyclopedia.