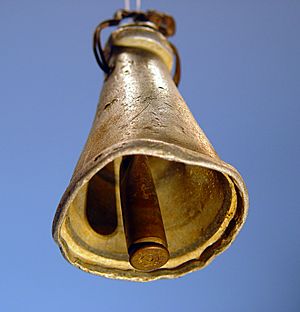 An improvised cowbell used for sheep or goats. The bell was found in 1988 in a field near Tuqu' (Tekoa) in the Judean hills, the West Bank. The bell's body is made of aluminum, probably a broken kitchen utensil, while the clapper is a brass cartridge case. The combination of a peaceful, pastoral use and a militant detail gives this item an ironic character, symbolizing the tragic daily reality of the Middle East conflict.

Irony is a term for a figure of speech. Irony is when something happens that is opposite from what is expected. It can often be funny, but it is also used in tragedies. There are many types of irony, including those listed below:

All content from Kiddle encyclopedia articles (including the article images and facts) can be freely used under Attribution-ShareAlike license, unless stated otherwise. Cite this article:
Irony Facts for Kids. Kiddle Encyclopedia.