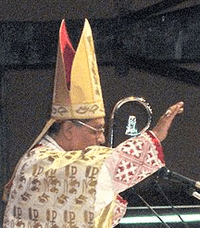 Dias was Prefect of the Congregation for the Evangelization of Peoples from 2006 to 2011, having served as Archbishop of Bombay (1996–2006) and papal diplomat in the Balkans, East Asia, and West Africa. He was elevated to the cardinalate in 2001.

All content from Kiddle encyclopedia articles (including the article images and facts) can be freely used under Attribution-ShareAlike license, unless stated otherwise. Cite this article:
Ivan Dias Facts for Kids. Kiddle Encyclopedia.