Glasenberg was born 7 January 1957 in South Africa to a Jewish family. His father, Samuel Glasenberg, was "a luggage manufacturer and importer born in Lithuania", and his mother, Blanche Vilensky, was South African. The family lived in Ilovo, a suburb of Johannesburg. Glasenberg was an athlete, and by his early 20s was national junior champion in race walking. Ivan married Elana Beverley Orelowitz in 1984. In his youth Glasenberg was also a friend of Mick Davis, who would become the CEO of mining company Xstrata. 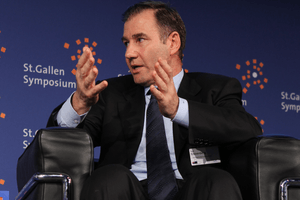 In 2005, BusinessWeek referred to Glasenberg as a key figure in the secretive commodities trading of Marc Rich's company Mark Rich & Co. AG. Rich was a billionaire commodities trader, who was charged with tax evasion and illegal deals with Iran, but later pardoned by US President Bill Clinton. Glencore is the corporate successor to Marc Rich & Co AG.

In September 2011, using his own dividends, Glasenberg started buying a larger share of Glencore, buying up to an additional US$54 million of Glencore stock. In April 2012 it was reported that Glasenberg held more than 15 per cent of Glencore's stock, placing him as the 20th richest mining billionaire, with Forbes estimating his net worth at US$7.3 billion.

In December 2020, Glasenberg announced that he will be retiring in 2021 thus stepping out of the CEO position after nearly 20 years. He was succeeded by fellow South African Gary Nagle, who was running the firm's coal business.

Glasenberg became CEO of the merged entity created when Glencore and Xstrata finalised one of the largest mining company mergers in history creating an US$88 billion company. Originally Xstrata CEO Mick Davis was to be CEO while Glasenberg would be President in a merger-of-equals transaction, however, due to holding out of major Xstrata shareholder Qatar, it became a takeover target, with a 3.05 Glencore to 1 Xstrata Share exchange to create the new entity Glencore Xstrata with Glasenberg becoming CEO. Davis left the company in July 2013.

Glasenberg has been a champion race-walker for both South Africa and Israel, and runs and swims daily to maintain his fitness. He is married with two children, and a resident of the village of Rüschlikon in Switzerland. Glasenberg paid 360 million SFr (£240m) in taxes to Rüschlikon following Glencore's flotation on the London Stock Exchange. The money enabled the residents to cut their taxation rate by 7%, which was approved by large majority after a public vote, and attracted criticism from some villagers with regards to Glencore's alleged controversial business practices.

When Glencore floated via an initial public offering in May 2011, it was reported that Glasenberg personally earned billions. In 2013 he replaced Mick Davis as CEO of the merged Glencore Xstrata, with a salary of an undisclosed amount. By 2016 according to Forbes Asia, Glasenberg had failed to make the cutoff of the 50 wealthiest Australians by net worth, with a threshold of US$500 million. Glassenberg's net worth was assessed at A$7.39 billion in the Financial Review 2021 Rich List.

All content from Kiddle encyclopedia articles (including the article images and facts) can be freely used under Attribution-ShareAlike license, unless stated otherwise. Cite this article:
Ivan Glasenberg Facts for Kids. Kiddle Encyclopedia.