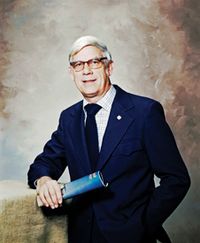 Jack Albert Kinzler (January 9, 1920 – March 4, 2014) was an American NASA engineer. He was the chief of the Technical Services Center at NASA's Lyndon B. Johnson Space Center. He was known within the agency as Mr. Fix It. He was awarded the NASA Distinguished Service Medal for creating the solar shield that saved Skylab. He was born in Pittsburgh, Pennsylvania.

Kinzler died from natural causes on March 4, 2014 in Taylor Lake Village, Texas. He was 94 years old.

All content from Kiddle encyclopedia articles (including the article images and facts) can be freely used under Attribution-ShareAlike license, unless stated otherwise. Cite this article:
Jack Kinzler Facts for Kids. Kiddle Encyclopedia.