John Millen Lasenby (9 March 1931 – 27 September 2019), commonly known as Jack Lasenby, was a New Zealand writer. He wrote over 30 books for children and young adults, many of which were shortlisted for or won prizes. He was also the recipient of numerous awards including the Margaret Mahy Medal and Lecture Award in 2003 and the Prime Minister's Award for Literary Achievement for Fiction in 2014. 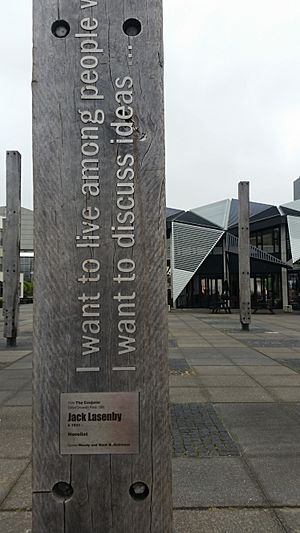 Born on 9 March 1931 in Waharoa, a small farming community in the Waikato, Lasenby was the son of Linda Lasenby (née Bryce) and Owen Liberty Lasenby. He attended Waharoa Primary School and went on to Matamata Intermediate and Matamata College from 1943 to 1949.

From 1950 to 1952, he studied at Auckland University College, where he first met Margaret Mahy, who was also to become a notable New Zealand children's writer. He later described her as "one of the three most intelligent people I've known, a dear friend, and a continual source of laughter, and imaginative wonder". Mahy, in turn, described him as "perhaps the most innately New Zealand writer of all New Zealand writers for children".

As well as being (at various times) a postman, waterfront worker, gardener, fisherman and labourer, Lasenby spent about 10 years as a deer-culler and possum-trapper in Te Urewera where he sometimes said he got his education in the telling of tall tales around the camp fire. He was also a primary school teacher, editor of the School Journal and lecturer of English at Wellington Teachers' College before retiring at 55 to become a full-time writer.

Lasenby's books are funny, witty, entertaining and imaginative. They include memorable and often hilarious characters such as Harry Wakatipu the talking horse, Aunt Effie and Uncle Trev, and range from tall tales and yarns to science fiction, dystopia and books set in the bush or in his own Depression-era childhood in small-town New Zealand. He recalled that "the Matamata district was alive with stories in my childhood, sad, funny, haunting".

Lasenby lived at Paremata near Wellington in the 1980s, where he sailed on the Porirua Harbour and Pauatahanui Inlet. With Sam Hunt and Ian Riggir they published poems on an 1886 upright press obtained from the Government Printing Office. He brought up his daughter and two stepchildren there.

Lasenby lived for many years in central Wellington and died on 27 September 2019, aged 88.

Many of Lasenby's books were shortlisted for or won prizes or were named as Storylines Notable Books.

Uncle Trev, first published in 1991, won the Storylines Gaelyn Gordon Award for a Much-Loved Book in 2012.

The Jack Lasenby Award was established in his name in 2002 by the Wellington Children's Book Association. His standing in the literary world and his identity as a Wellington writer was also recognised with a plaque on the Wellington Writers Walk, unveiled by Governor-General Sir Jerry Mateparae on 21 March 2013.

In 2003, Lasenby was awarded the Margaret Mahy Medal and Lecture Award. He received the Prime Minister's Award for Literary Achievement for Fiction in 2014.

All content from Kiddle encyclopedia articles (including the article images and facts) can be freely used under Attribution-ShareAlike license, unless stated otherwise. Cite this article:
Jack Lasenby Facts for Kids. Kiddle Encyclopedia.