Jacks Peak Park is a county park in Monterey County, California. Its central feature is Jacks Peak, the highest point on the Monterey Peninsula, rising 1,068 feet (325 m) above Monterey and Carmel. The park encompasses 525 acres under control of the Monterey County Parks Department.

View of Monterey and Monterey Bay from Jacks Peak.

The park is part of the Pueblo Lands tract acquired in 1859 by Scottish immigrant David Jack. The first 55 acres (220,000 m2) that were to become the park were purchased by Talcott and Margaret Pardee Bates in 1964. They sold it to the Nature Conservancy, who eventually sold it to Monterey County. In 1971, the county purchased the remaining acres for the park from Del Monte Properties. The park opened in January, 1977. 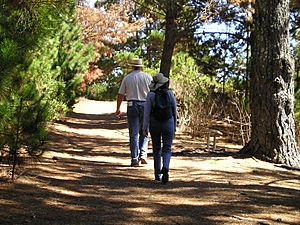 The park allows picnics and day hiking. Several miles of trails, including a self-guided nature trail, wrap around Jacks Peak and through the rest of the park.

All content from Kiddle encyclopedia articles (including the article images and facts) can be freely used under Attribution-ShareAlike license, unless stated otherwise. Cite this article:
Jacks Peak Park Facts for Kids. Kiddle Encyclopedia.