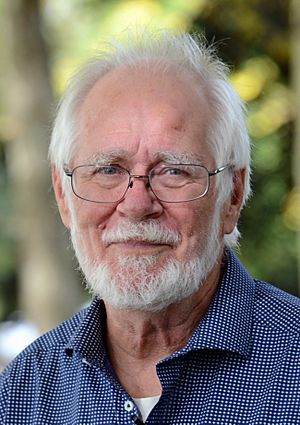 Jacques Dubochet (born 8 June 1942) is a retired Swiss biophysicist. He was born in Aigle, Switzerland.

He is a former researcher at the European Molecular Biology Laboratory in Heidelberg, Germany, and an honorary professor of biophysics at the University of Lausanne in Switzerland.

In 2017, he received the Nobel Prize in Chemistry together with Joachim Frank and Richard Henderson "for developing cryo-electron microscopy for the high-resolution structure determination of biomolecules in solution".

All content from Kiddle encyclopedia articles (including the article images and facts) can be freely used under Attribution-ShareAlike license, unless stated otherwise. Cite this article:
Jacques Dubochet Facts for Kids. Kiddle Encyclopedia.