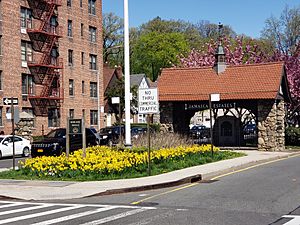 Jamaica Estates is a neighborhood in the New York City borough of Queens. Jamaica Estates is part of Queens Community District 8 and located in the northern portion of Jamaica. It is bounded by Union Turnpike to the north, Hillside Avenue to the south, Utopia Parkway and Homelawn Street to the west, and 188th Street to the east. The main road through the neighborhood is Midland Parkway.

The surrounding neighborhoods are Jamaica Hills to the west; Jamaica to the southwest; Hollis to the southeast; Holliswood and Queens Village to the east; and Fresh Meadows, Utopia, and Hillcrest to the north.

The area is characterized by million-dollar homes and a multitude of trees. Midland Parkway, a four-lane boulevard with a wide, landscaped median strip whose renovation was completed in 2007, is the area's main artery. The neighborhood consists of mostly upper-middle-class residents. Most houses are single-family detached homes in the Tudor, Craftsman, Cape Cod, or Mediterranean styles.

Jamaica Estates was created in 1907 by the Jamaica Estates Corporation, which developed the hilly terminal moraine's 503 acres (2.04 km2), while preserving many of the trees that had occupied the site. The company was founded by Ernestus Gulick and Felix Isman, both of Philadelphia.

Jamaica Estates now has significant Modern Orthodox Jewish American and South Asian American populations. The latter has been particularly affected by the wave of mortgage foreclosures that began in 2008. The only apartments and multi-family housing lie near the southern border within a few blocks from and along Hillside Avenue. The shopping corridors are along Hillside Avenue and Union Turnpike.

In 2007, following the damage of the roof of the Historic Gatehouse in Hurricane Isabel, the restoration and beautification of the Gatehouse and Malls was completed.

The Jamaica Estates Association, founded in 1929, continues as an active, vital civic organization representing the community. An Historical Plaque was unveiled April 23, 2010, on the Midland Mall by The Aquinas Honor Society of the Immaculate Conception School and by the sponsor of the plaque, Senator Frank Padavan.

In contrast to much of Queens, most streets in Jamaica Estates do not conform to the rectangular street grid and follow topographic lines, the most notable example being Midland Parkway. Many of the named streets have etymologies originating from Languages of the United Kingdom, such as Aberdeen, Avon, Hovenden, Barrington, Chelsea, and Chevy Chase Street. However, unlike Forest Hills Gardens, which is a similarly wealthy Queens neighborhood with an atypical Queens street layout, the street numbering system does conform to the rest of Queens, employing the "dash" found in the Philadelphia grid street numbering system familiar throughout all other parts of the borough.

In the film Coming to America, Cleo McDowell (John Amos) lived in Queens at 24-32 Derby Avenue, a fictitious address. 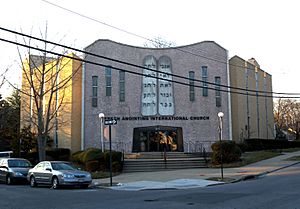 All content from Kiddle encyclopedia articles (including the article images and facts) can be freely used under Attribution-ShareAlike license, unless stated otherwise. Cite this article:
Jamaica Estates, Queens Facts for Kids. Kiddle Encyclopedia.