Fresh Meadows is a neighborhood in the northeastern section of the New York City borough of Queens. Fresh Meadows used to be part of the broader town of Flushing and is bordered to the north by the Horace Harding Expressway; to the west by Pomonok, St. John's University and the sub-neighborhoods of Hillcrest and Utopia; to the east by Cunningham Park and the Clearview Expressway; and to the south by the Grand Central Parkway.

The name "Fresh Meadows" dates back to before the American Revolution. Fresh Meadows was part of the Town of Flushing, which had large areas of salt meadows, such as the original "Flushing Meadows". The wetlands in the hilly ground south and east of the village of Flushing, however, were fed by freshwater springs, and thus were "fresh meadows". Fresh Meadows Road (which today follows the same route under a number of names, including Fresh Meadows Lane and part of Utopia Parkway) traversed the area, and served as the route from the landing place at Whitestone to the village of Jamaica.

During the American Revolution, British troops were encamped in the area. General Benedict Arnold drilled his troops in the area, on the current location of M.S. 216. To facilitate the transport of military supplies from British ships using the Whitestone Landing and the troops encamped further east, a new road was built to connect the Fresh Meadows Road with Hempstead. This road began at what is now the intersection of Utopia Parkway and 73rd Avenue, near a local landmark along the Fresh Meadows Road: the remnants of a large tree that had burned after being struck by lightning, and that was known as the "Black Stump". The road took its name from this feature, and was called "Black Stump Road." During the 19th century, a farming community known as Black Stump developed in the area. Black Stump School was located at present-day Utopia Playground, at 73rd Avenue and Utopia Parkway. For several years, the woods of Black Stump were rumored to be haunted because people heard strange sounds coming from the woods. In 1908, the mysterious sounds were discovered to be coming from a recluse who lived in a small hut and sang Irish folk songs at night.

Fresh Meadow Country Club opened in 1923. The country club was named after an area northeast of Flushing even though it was actually located southeast of Flushing, just south of what is presently the Long Island Expressway near 183rd Street. The golf course was designed by A.W. Tillinghast. The PGA Championship was held at Fresh Meadow Country Club in 1930, and the U.S. Open was held at the course in 1932. In 1937, the golf course hosted a charity game between John Montague, Babe Ruth, Babe Didrikson, and Sylvania Annenberg, a game that was watched by 10,000 fans, some of whom rushed the golf course and left Babe Ruth's shirt in tatters.

In February 1946, the land was sold to New York Life Insurance Company, and it became the Fresh Meadows Housing Development. New York Life Insurance Company did not allow black individuals to live in the Fresh Meadows Housing Development. It was also built to house local World War II veterans. The complex and its eponymous shopping center were among the first in the United States designed primarily to accommodate automobile rather than pedestrian traffic. In 1949, Lewis Mumford described the Fresh Meadows housing complex as "perhaps the most positive and exhilarating example of large-scale community planning in this country." 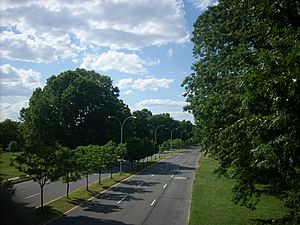 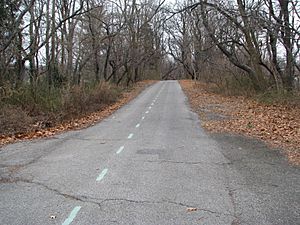 Until 2004, the neighborhood was home to Klein Farm, the last surviving commercial farm in New York City, located on 73rd Avenue between 194th and 195th Streets. Efforts by local residents and civic officials are currently under way to reopen the farm.

In October 2011, a book written by Fred Cantor and Debra Davidson that chronicled the history of Fresh Meadows was released.

Today, the area has Cunningham Park, and the Long Island Motor Parkway, a disused highway now used as a biking/walking trail also goes through the area as part of the Brooklyn–Queens Greenway.

The entirety of Community Board 8, which comprises Fresh Meadows as well as Kew Gardens Hills and Jamaica Hills, had 156,217 inhabitants as of NYC Health's 2018 Community Health Profile, with an average life expectancy of 83.9 years. This is higher than the median life expectancy of 81.2 for all New York City neighborhoods. Most inhabitants are middle-aged adults and youth: 20% are between the ages of 0–17, 28% between 25–44, and 27% between 45–64. The ratio of college-aged and elderly residents was lower, at 10% and 15% respectively.

As of 2017, the median household income in Community Board 8 was $64,005. In 2018, an estimated 22% of Fresh Meadows residents lived in poverty, compared to 19% in all of Queens and 20% in all of New York City. One in eleven residents (9%) were unemployed, compared to 8% in Queens and 9% in New York City. Rent burden, or the percentage of residents who have difficulty paying their rent, is 54% in Fresh Meadows, slightly higher than the boroughwide and citywide rates of 53% and 51% respectively. Based on this calculation, as of 2018[update], Fresh Meadows is considered to be high-income relative to the rest of the city and not gentrifying.

Population estimates of Fresh Meadows vary widely depending on which boundaries are considered. Zip codes 11365 and 11366 together have an estimated population of 59,873 as of 2017, according to the U.S. Census Bureau, but this also includes part of Auburndale north of the Long Island Expressway, while excluding Hillcrest. According to 2009 census data, however, the neighborhood had 16,100 residents, 44 percent of whom residents are white, 24 percent Asian, 14 percent black, 29 percent Hispanic, and 3 percent identify as multiracial. The neighborhood has historically and traditionally been home to one of New York City's most notable Jewish communities. Today, there is an increasing presence of younger Asian American and Colombian American families, Israeli Americans, Bukharian Jews, and West Indian Americans living in the neighborhood. 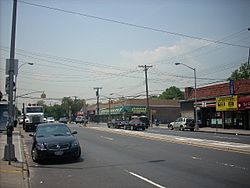 Hillcrest is in western Fresh Meadows. Its name derives from its location on the hills between Jamaica and Flushing. The neighborhood runs from Union Turnpike to the LI Expressway, between Utopia Parkway and 164th Street. Union Turnpike is its main commercial strip. It is part of Queens Community Board 8. The ZIP Codes for the neighborhood are 11365 and 11366. It neighbors are Jamaica Hills and Jamaica Estates to the south, Briarwood and Kew Gardens Hills to the west, and Pomonok, Utopia, and FreshMeadows to the north and east. It is mostly made up of single-family homes, is in a relatively well-off public school district, and has a low crime rate according to the NYPD 107th Pct.

As with many neighborhoods in the city, the perception of boundaries is quite different from whatever official or unofficial maps exist, especially in Queens, where there were many towns and villages. Most people in the northeastern part of Hillcrest self-identify as being in Fresh Meadows, as does everyone living in the nearby "Utopia" area. Others tend to identify with neighborhoods that surround them. There is a small group in the center of the Hillcrest area that identify exclusively with it. Hillcrest is home to an Orthodox Jewish community.

Utopia, a middle class neighborhood, is in western Fresh Meadows, bordered by Utopia Parkway to the west, 188th Street to the east, Union Turnpike to the south, and 73rd Avenue to the north. It adjoins the neighborhoods of Jamaica Estates, Hillcrest, and Fresh Meadows. The neighborhood is part of Queens Community Board 8. ZIP code is 11366. Utopia is a predominantly middle-class neighborhood. It contains a large group of Conservative and Orthodox Jews as well as groups of Chinese, Korean, Russian, Indian, and Hispanic people. Utopia is a mostly suburban-like neighborhood with tree-lined streets. Utopia Playground and Fresh Meadows Playground serve residents of this area.

In 1905, the Utopia Land Company purchased 50 acres (20 ha) of farmland "between the communities of Jamaica and Flushing". The group intended to build a cooperative community for Jewish families interested in moving away from the Lower East Side of Manhattan. After the initial acquisition, the company was unable to secure enough funding to further develop the area, however. Thirty-five years later, the Gross-Morton Park Corporation of nearby Jamaica began to develop the area, which had remained farmland since the original purchase.

St. John's University, a private Catholic university, has its main campus in Hillcrest.

The Japanese Weekend School of New York, a Japanese weekend school, holds classes at the building of P.S. 26. The school also holds classes in Westchester County and Long Island.

The Japanese School of New York formerly held classes in Fresh Meadows between 1980 and 1991. 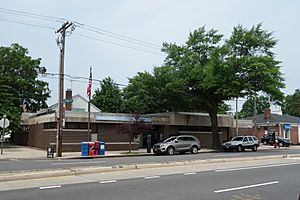 All content from Kiddle encyclopedia articles (including the article images and facts) can be freely used under Attribution-ShareAlike license, unless stated otherwise. Cite this article:
Fresh Meadows, Queens Facts for Kids. Kiddle Encyclopedia.