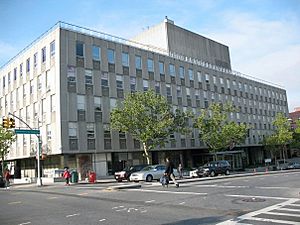 Pomonok is a working class neighborhood in the New York City borough of Queens. This large public housing development in South Flushing was built in 1949 on the former site of Pomonok Country Club. The name comes from a Native American word for eastern Long Island, and means either "land of tribute" or "land where there is travelling by water".

The Pomonok Country Club was a golf course in Pomonok between 1886 and 1949. The golf course was located between Kissena Boulevard and 164th Street, just to the south of Horace Harding Boulevard (now the Long Island Expressway) and to the east of Queens College. The club was established in 1886 by members of the Flushing Athletic Club in Flushing and moved to the Kissena Boulevard location in 1921. Devereux Emmet designed the golf course. The members disbanded and sold the course in 1949. Part of the site today contains the Electchester cooperative housing development, Pomonok public housing and an extension of Parsons Boulevard. The golf course hosted the PGA Championship in 1939, which Henry Picard won. The tournament was held at the same time of the 1939 New York World's Fair, which was located at Flushing Meadows–Corona Park, approximately 2 miles (3.2 km) miles northwest of Pomonok Country Club.

In Pomonok, there is also Electchester, a cooperative housing complex at Jewel Avenue and Parsons Boulevard in Pomonok, was established by Harry Van Arsdale, Jr. and Local 3 of the International Brotherhood of Electrical Workers in 1949, when Van Arsdale worked with the Joint Industry Board of the Electrical Industry to purchase 103 acres (0.42 km2) of the former Pomonok Country Club and build apartment buildings. 5,550 people live in about 2,500 units in 38 buildings, many of which are six-story brick structures. It is served by Public School 200, which is on land donated by Electchester. The union provided the majority of the mortgage. New York state offered tax abatements. Electchester was classified as a "limited dividend nonprofit", subject to state regulations. The first families paid $475 per room for equity shares, and carrying charges of $26 per month per room, on apartments ranging from three and a half to five and a half rooms.

The housing complexes that make up the neighborhood of South Flushing (Pomonok Housing Project & Electchester Co-Op) have had some issues with crime, specifically with gangs and drugs. There have been various shootings, robberies and drug busts over the years in the area. Both housing complexes are patrolled by the NYPD's 107th Precinct. There is also an NYPD PSA-9 Housing Police Unit station located in the Pomonok Houses.

All content from Kiddle encyclopedia articles (including the article images and facts) can be freely used under Attribution-ShareAlike license, unless stated otherwise. Cite this article:
Pomonok, Queens Facts for Kids. Kiddle Encyclopedia.