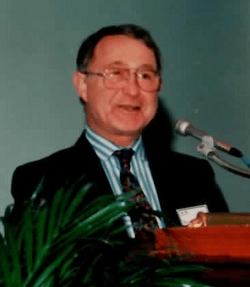 J. Freeman Gilbert (August 9, 1931 – August 15, 2014) was an American geophysicist. He was best known for his work with George E. Backus on inverting geophysical data and also for his role in establishing an international network of long-period seismometers.

Gilbert was born in Vincennes, Indiana. He studied at the University of California, Los Angeles.

Gilbert received many honors, including the Gold Medal of the Royal Astronomical Society in 1981; the William Bowie Medal in 1999; and the Medal of the Seismological Society of America in 2004.

In his later years, Gilbert travelled throughout the world with his wife, Sally Gilbert. He died after being injured in a car accident in Southern Oregon on August 15, 2014. He was 83 years old.

All content from Kiddle encyclopedia articles (including the article images and facts) can be freely used under Attribution-ShareAlike license, unless stated otherwise. Cite this article:
James Freeman Gilbert Facts for Kids. Kiddle Encyclopedia.