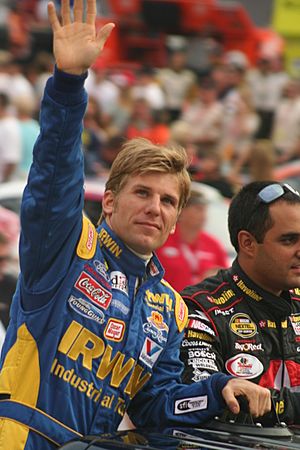 McMurray was born in Joplin, Missouri. He grew up racing go-karts and competed in nearly every form of karting around the country before moving to late-model stock cars. In 2007, McMurray returned to the karting ranks and still competes in World Karting Association races on many of his open weekends. He races annually at the World Karting Association's Daytona KartWeek in late December.

McMurray married Christy Futrell in July 2009. They have two children. In 2018, McMurray revealed that he had incorporated the names of his children into the design of his racing helmet.

Throughout 2017, McMurray has also been actively running and cycling with other drivers, he completed the Assault on Mt. Mitchell on May 5, and on December 12, competed in his first marathon, the Kiawah Island Golf Resort Marathon.

All content from Kiddle encyclopedia articles (including the article images and facts) can be freely used under Attribution-ShareAlike license, unless stated otherwise. Cite this article:
Jamie McMurray Facts for Kids. Kiddle Encyclopedia.