Jan Evangelista Purkyně (17 or 18 December 1787 – 28 July 1869) was a Czech anatomist and physiologist. He was one of the best known scientists of his time. In 1839, he coined the term 'protoplasm' for the fluid substance of a cell. 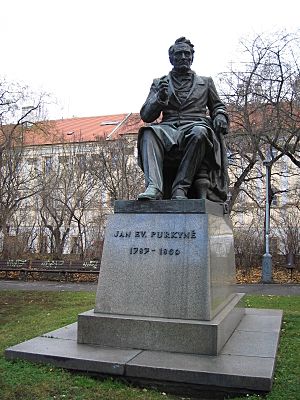 Purkyně was born in Bohemia, which was then in the Austro-Hungarian Empire, now it is in the Czech Republic. In 1818, he graduated with a degree in medicine, and was appointed Professor of Physiology. He published two volumes which contributed to experimental psychology. He created the world's first Department of Physiology at the University of Breslau in Prussia (now Wrocław, Poland), and the world's first official physiology laboratory.

He is best known for his discoveries of Purkinje cells and Purkinje fibres. Purkyně also introduced the scientific terms plasma and protoplasm (the substance found inside cells.) Purkyně discovered sweat glands in 1833 and published a thesis that recognised nine principal configuration groups of fingerprints in 1823.

He was one of the best known scientists of his time. Such was his fame that when people from outside Europe wrote letters to him, all that they needed to put as the address was "Purkyně, Europe".

He is buried in the Czech National Cemetery in Vyšehrad, Prague, Czech Republic.

The crater Purkyně on the Moon is named after him, as is the asteroid 3701 Purkyně.

All content from Kiddle encyclopedia articles (including the article images and facts) can be freely used under Attribution-ShareAlike license, unless stated otherwise. Cite this article:
Jan Purkyně Facts for Kids. Kiddle Encyclopedia.