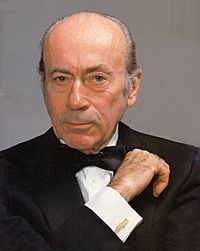 In 1968, he became artistic director of the Grand Theatre in Warsaw, and was General Director of Music in Bonn from 1979 to 1982. At the same time, he directed the Danish National Symphony Orchestra in Copenhagen.

On 26 March 1958, Krenz was the first person to conduct Musique funèbre by Witold Lutosławski. In addition to conducting many orchestras, he has also written many compositions.

All content from Kiddle encyclopedia articles (including the article images and facts) can be freely used under Attribution-ShareAlike license, unless stated otherwise. Cite this article:
Jan Krenz Facts for Kids. Kiddle Encyclopedia.