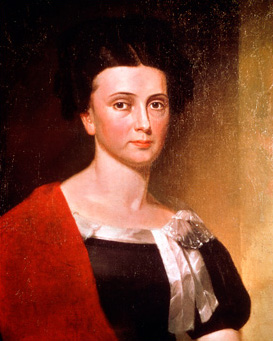 Jane Irwin Harrison (July 23, 1804 – May 11, 1846) was the First Lady of the United States for a very brief period. She was married to William Henry Harrison Jr. William was the son of William Henry Harrison, ninth President of the United States. As the daughter-in-law of the president, she acted as the First Lady for about a month in 1841. She acted as his official hostess during his brief tenure in office, which lasted for a month in 1841. President’s wife Anna Harrison was very ill, and she could not go out of their home in Ohio, when her husband moved to take up the presidency.

All content from Kiddle encyclopedia articles (including the article images and facts) can be freely used under Attribution-ShareAlike license, unless stated otherwise. Cite this article:
Jane Irwin Harrison Facts for Kids. Kiddle Encyclopedia.