Japanese friendship dolls (友情人形, yūjō ningyō) or Japanese ambassador dolls and the American blue-eyed dolls (青い目の人形, aoi me no ningyō) were programs of goodwill between Japan and the United States. American Sidney Gulick, a missionary in Japan, initiated an exchange of dolls between children as a way to ease cultural tensions in the 1920s. Japanese Viscount Eiichi Shibusawa responded by initiating a program to send 58 dolls to American museums and libraries.

A similar concept is the Kokeshi doll.

The Immigration Act of 1924 prohibited East Asians from immigrating to the United States, which increased tension between the US and Japan. Dr. Sidney Gulick was a former missionary who spent time in Japan between 1888 and 1913. He was familiar with how important dolls are in Japanese culture, and to promote goodwill between the countries he initiated a program to send dolls from the US to children in Japan. Gulick participated in forming a group called the Committee on World Friendship Among Children. In 1927, the first project was to organize the sending of 12,739 friendship dolls, also known as American blue-eyed dolls to Japan. These dolls arrived in time for Hinamatsuri, the annual Japanese doll festival.

Inspired by this act of goodwill, Viscount Eiichi Shibusawa led a collection in Japan to reciprocate for this gift. The best doll makers in Japan were commissioned to produce 58 friendship dolls. Each doll was 32-33 inches tall and were dressed in beautiful kimonos made of silk. Each doll also came with unique accessories. These Japanese friendship dolls represented specific Japanese prefectures, cities or regions. The dolls were sent to libraries and museums throughout the United States.

Denny Gulick, grandson of Sidney, has tried to revive the doll exchange idea. 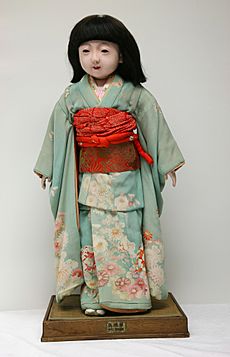 Miss Shimane at the Children's Museum of Indianapolis

Over the years, a few dolls were lost or are missing, but many are still on display today. Those whose locations are known include: 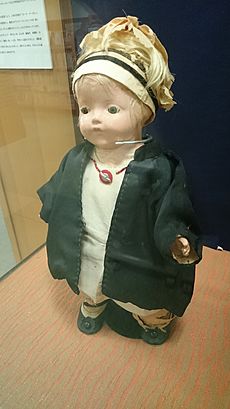 In 1927, children in the United States sent over 12,000 Friendship Dolls to Japanese elementary school children as a gesture of friendship. Dolls were donated by churches and schools around the country and suggested to have a "Mama voice" and cost not more than $3.00. Each doll was sent with a message including the name of the doll, the names of the givers and the address for the "thank you" letter. Dolls were given farewell parties and given "passports" that cost 1 cent and "railroad and steamer tickets" that cost 99 cents. It was suggested that "girls specialize on the selection of the dolls and the making of their clothing and that boys serve as business and ticket agents." Dolls were also accompanied with a poem written by Robert Underwood Johnson titled Friends Across the Sea which was written at the request of the Committee of World Friendship among Children. Fewer than 100 of the dolls were sent to Formosa and divided amongst the ethnically segregated elementary schools and kindergartens. Displayed with their own passport, only 334 dolls survived WWII and are now are preserved with the best care in Japan.

All content from Kiddle encyclopedia articles (including the article images and facts) can be freely used under Attribution-ShareAlike license, unless stated otherwise. Cite this article:
Japanese friendship dolls Facts for Kids. Kiddle Encyclopedia.