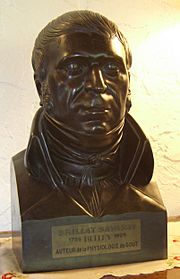 Bust of Brillat-Savarin in Belley, France

Jean Anthelme Brillat-Savarin (April 1, 1755, Belley, France - February 2, 1826, Paris), a French lawyer and politician, and gained fame as an epicure and gastronome. He was born in the town of Belley, Ain, where the Rhone River then separated France from Savoy, to a family of lawyers.

He studied law, chemistry and medicine in Dijon in his early years and thereafter practiced law in his hometown. In 1789, at the opening of the French Revolution, he was sent as a deputy to the Estates-General that soon became the National Constituent Assembly, where he acquired some limited fame, particularly for a public speech in defense of capital punishment.

He adopted his second surname upon the death of an aunt named Savarin who left him her entire fortune on the condition that he adopt her name.

At a later stage of the Revolution there was a bounty on his head, and he sought political asylum at first in Switzerland. He later moved to Holland, and then to the new-born United States, where he stayed for three years in Boston, New York, Philadelphia and Hartford, living on the proceeds of giving French and violin lessons. For a time he was first violin in the Park Theater in New York.

He returned to France under the Directorate in 1797 and acquired the magistrate post he would then hold for the rest of his life, as a judge of the Court of Cassation. He published several works on law and political economy. He remained a bachelor, 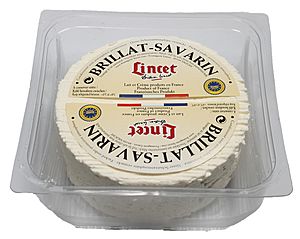 Brillat-Savarin cheese, the Savarin mould, a ring mould with a rounded contour, and Gâteau Savarin are named in his honour.

His reputation was spread to a wide television audience by Chairman Kaga of the TV series "Iron Chef" which introduced to millions the quote "Tell me what you eat, and I will tell you what you are."

Brillat-Savarin is often considered as the father of low-carbohydrate diet. He considered sugar and white flour to be the cause of obesity and he suggested instead protein-rich ingredients.

All content from Kiddle encyclopedia articles (including the article images and facts) can be freely used under Attribution-ShareAlike license, unless stated otherwise. Cite this article:
Jean Anthelme Brillat-Savarin Facts for Kids. Kiddle Encyclopedia.