The 2016 presidential campaign of John Ellis "Jeb" Bush, the 43rd Governor of Florida, was formally launched on June 15, 2015, coming six months after announcing the formal exploration of a candidacy for the 2016 Republican nomination for the President of the United States on December 16, 2014, and the formation of his Right to Rise PAC. It is headquartered in Miami, Florida. He suspended his campaign on February 20, 2016. 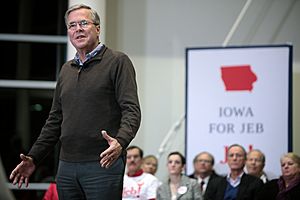 On June 4, the same day of Governor Rick Perry's formal campaign announcement, an anonymous Bush staffer leaked that Bush would formally announce his candidacy on June 15. Bush made a trip to Germany, Poland, and Estonia before returning to begin his campaign. On June 15, 2015, Bush formally announced his candidacy at Miami Dade College's Kendall Campus, in Miami, Florida.

Bush embarked on a tour following his June 15 announcement, with stops in Iowa, New Hampshire, South Carolina, and Nevada. On July 9, 2015, at a campaign fund-raising conference in the Bush family compound in Kennebunkport, Maine, Bush announced that super PACs which support his candidacy, mainly Right to Rise, had received a total of $103 million during the previous six months. The campaign itself had received $11.4 million, $700,000 a day, during its first two weeks.

All content from Kiddle encyclopedia articles (including the article images and facts) can be freely used under Attribution-ShareAlike license, unless stated otherwise. Cite this article:
Jeb Bush presidential campaign, 2016 Facts for Kids. Kiddle Encyclopedia.