Jed Carlson Lowrie (born April 17, 1984) is an American professional baseball infielder for the Oakland Athletics of Major League Baseball (MLB). In addition to the A's, Lowrie has played in MLB for the Boston Red Sox and Houston Astros. While primarily a shortstop throughout his career, Lowrie has also played third base and second base. 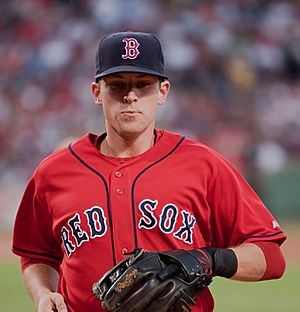 Lowrie was born on April 17, 1984, in Salem, Oregon, and later attended North Salem High School. In 2004, while playing for the Stanford University Cardinal baseball team, Lowrie earned Pacific-10 Conference Player of the Year honors. He was a First Team All-American in 2004 and 2005. At Stanford, future major league outfielders Sam Fuld, John Mayberry Jr., and Carlos Quentin were among Lowrie's teammates.

From 2005 through 2007, Lowrie played for Boston at three different minor league levels. During the 2007 season, he made the Eastern League All-Star team, was named the Portland Sea Dogs Most Valuable Player, and the Red Sox Minor League Offensive Player of the Year as well. He was promoted to the Pawtucket Red Sox of the Class AAA International League late in the season.

Lowrie was called up from the minor leagues of the Red Sox on April 10, 2008 after Mike Lowell was placed on the disabled list (DL). He made his debut on April 15, driving home three runs in a 5–3 victory in Cleveland.

On December 14, 2011, he was traded to the Houston Astros. The Astros in 2013 traded Lowrie to the Oakland Athletics. The Astros announced in 2014, that they had agreed to a three-year contract with Lowrie wanting him back as he fit well with one of the main objectives for the 2015 Astros, which was to improve the defensive skills of the team's infield. The deal was worth as much as $28 million. Later, Lowrie was traded back to the Athletics.

All content from Kiddle encyclopedia articles (including the article images and facts) can be freely used under Attribution-ShareAlike license, unless stated otherwise. Cite this article:
Jed Lowrie Facts for Kids. Kiddle Encyclopedia.