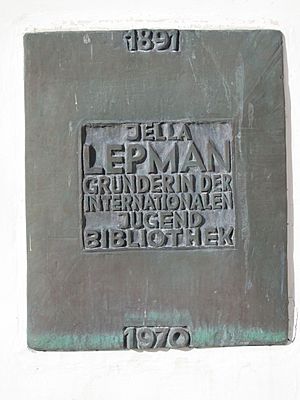 Jella Lepman (15 May 1891, in Stuttgart – 4 October 1970, in Zurich) was a German journalist, author and translator who founded the International Youth Library in Munich.

Jella Lehman, born in Stuttgart, was the oldest daughter of the manufacturer Josef Lehmann (1853-1911) and his wife Flora (née Lauchheimer; 1867-1940). The family were members of the Jewish-liberal Judaism. Through her mother she was a cousin of the four-year younger Max Horkheimer. After her schooling at the Königin-Katharina-Stift-Gymnasium in Stuttgart, she spent a year near Lausanne, Switzerland. At the age of 17, in 1908, she organised an international reading room for the children of foreign works at a tobacco factory in an industrial quarter of Stuttgart.

In 1913 she married Gustav Horace Lepman (1877-1922), the German-American co-owner of a bedspring factory in Stuttgart-Feuerbach. Together they had two children: (Anne-Marie, born in 1918, Günther, born in 1921). During the World War I Gustav Lepman served as an officer in the German army on the battlefields in France. He died as the result of his war injuries in 1922, leaving her widowed at age 31.

After the death of her husband, Jella Lepman became editor of the Stuttgarter Neues Tagblatt, the first woman ever to hold this position. She wrote socio-political contributions and in 1927 introduced the newspaper supplement for women titled "The woman in house, profession and society". In addition, she published her first children's book (1927 The Sleeping Sunday) and a theatrical play for children (1929 The Singing Pfennig) which was performed on the smaller state of the Württemberg State Theatre. She became a member of the German Democratic Party (Deutsche Demokratische Partei, DDP), where she was a leader in the women's group. In 1929, she ran, unsuccessfully, for the German Reichstag.

With the Nazi seizure of power in 1933, Jella Lepman, as a Jew, lost her job at the newspaper, but was able to continue working for it as a freelancer until 1935. In 1936, she emigrated with her two children via Italy to England. With her children cared for in boarding schools, she initially took on freelance journalistic and literary assignments. In 1938 she helped organise the papers of Arthur Schnitzler which had recently arrived at the University of Cambridge. Later, she worked for the BBC and the American Broadcasting Station in Europe (ABSIE). In 1942 she published a German-language reader titled Die Kinder vom Kuckuckshof, eine Detektivgeschichte aus dem Schwarzwald for the publisher John Murray and in 1943, under the pseudonym Katherine Thomas, the book Women in Nazi Germany .

After the end of World War II, she returned to Germany in October 1945 as a consultant to the US Army as part of the Reeducation [de] program of the American occupied zone, and responsible for programmes for women and youth. She lived first in Bad Homburg vor der Höhe, then in Munich. In 1946 she organised the first international exhibition in post-war Germany, the Internationale Jugendbuchausstellung [de], which displayed 2000 books from 14 countries. It was shown in several large cities around Germany and visited by over one million people. These books became the founding collection for the International Youth Library which was opened in the Schwabing section of Munich 14 September 1949. She remained its director until her retirement in 1957.

During the reconstruction of Germany, she was convinced that placing books into the hands of the children would offer them hope for the future. In 1952 she initiated a conference about international understanding through children's books, which led to the foundation of the non-profit International Board on Books for Young People in Zurich in 1953. Lepman wrote more in detail about this time of her life in her autobiographical book A Bridge of Children's Books. She was one of the initiators of the Hans Christian Andersen Award, the world's most important award for writers and illustrators of young people's literature. It was first issued in 1956, and she served as its jury president from 1956 to 1960.

Jella Lepman wrote many children’s books and collections of children’s stories, including a multivolume collection of bedtime stories that she collected over the years. Her books have been translated into many different languages. She gave her friend Erich Kästner the idea that inspired his children's book The Animals' Conference (Die Konferenz der Tiere, 1949).

Since 1991, in honor of Lepman's 100th birthday, the International Board on Books for Young People awards the "Jella-Lepman Medal" to individuals who have made a significant contribution to children's literature.

All content from Kiddle encyclopedia articles (including the article images and facts) can be freely used under Attribution-ShareAlike license, unless stated otherwise. Cite this article:
Jella Lepman Facts for Kids. Kiddle Encyclopedia.