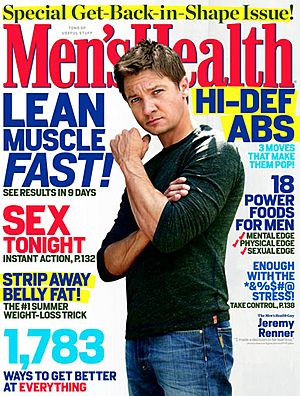 Renner was born in Modesto, California, to mother Valerie Cearley (née Tague) and father Lee Renner, who managed McHenry Bowl, a Modesto bowling alley, in the 1980s. He is the oldest of seven children.

Renner graduated from Fred C. Beyer High School in Modesto in 1989. He attended Modesto Junior College, where he studied computer science and criminology, before he took a drama class as an elective and decided to pursue acting.

As well as acting, Renner is a singer-songwriter, guitarist, keyboardist, and drummer. Early in his acting career, he performed in the Sons of Ben. For the soundtrack of North Country he performed "I Drink Alone". In the 2006 films Love Comes to the Executioner and The Assassination of Jesse James by the Coward Robert Ford, Renner performed the songs "American Pie" and "Good Ole Rebel". He also appeared in music videos for "Trouble" by P!nk and "Scenes on Sunset" by Brother Sal. 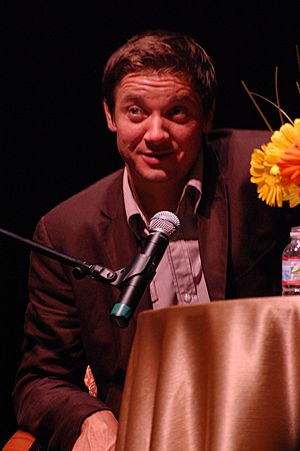 Renner married Canadian model Sonni Pacheco on January 13, 2014. Renner and Pacheco have a daughter born 2013. In, 2014, Pacheco filed for divorce from Renner. They share custody of their daughter.

Renner also runs a house-renovating business with his best friend and fellow actor, Kristoffer Winters. In addition to acting, he studied Arnis (Filipino martial arts) and Muay Thai martial arts, mainly as preparation for his roles in the Mission Impossible and Avengers franchises.

Renner is a supporter of the San Francisco 49ers. He narrated the NFL Network documentary series The Timeline episode "A Tale of Two Cities", which chronicles the history of the team's rivalry with the Dallas Cowboys, and the introductory video for the grand opening of Levi's Stadium.

All content from Kiddle encyclopedia articles (including the article images and facts) can be freely used under Attribution-ShareAlike license, unless stated otherwise. Cite this article:
Jeremy Renner Facts for Kids. Kiddle Encyclopedia.