Jeroen René Victor Anton Dijsselbloem ( born 29 March 1966) is a Dutch politician and economist serving as Chairman of the Dutch Safety Board since 1 May 2019. A member of the Labour Party (PvdA), he has also been Chairman of the supervisory board of Wageningen University since 1 April 2019.

Jeroen René Victor Anton Dijsselbloem was born on 29 March 1966 in Eindhoven, Netherlands. His parents were both schoolteachers. He was raised as a Roman Catholic.

Dijsselbloem went to a Roman Catholic primary school in Son en Breugel and the Catholic secondary school Eckartcollege (1978–85) in Eindhoven. He studied at the Wageningen University between 1985 and 1991, where he obtained an engineer's degree ("ingenieur") in agricultural economics in 1991, majoring in business economics, agricultural policy, and social and economic history.

Dijsselbloem subsequently did research in business economics at the University College Cork (1991) in Ireland, but he did not graduate from this university.

Dijsselbloem’s interest in politics began in 1983, spurred by the mass protests against U.S. Pershing cruise missiles that drew hundreds of thousands of Dutch youth into leftwing movements. In 1985, he became a member of the Labour Party (PvdA).

From 1993 to 1996 he worked for the parliamentary group of the Labour Party. From 1994-96 he was a member of the municipal council of Wageningen. From 1996 to 2000 he worked at the Ministry of Agriculture, Nature and Fishery under Minister Jozias van Aartsen and State secretary Geke Faber. 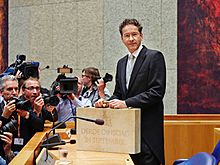 Jeroen Dijsselbloem on Prinsjesdag in 2014

On 15 November 2012, Dijsselbloem was appointed by Queen Beatrix of the Netherlands to serve as Minister of Finance in the Second Rutte cabinet. From the start, Dijsselbloem emphasised his commitment to fiscal discipline.

On 1 February 2013, he nationalized the financial institution SNS Reaal, preventing its bankruptcy. Shareholders and owners of subordinated debt are expropriated with no compensation and others banks of the country have to contribute to the takeover up to one billion euros. By December 2013, Dutch press named Dijsselbloem politician of the year, describing him as "intelligent, balanced and good at finding compromises". In a response, he said that he was surprised about winning the prize because he "does not work on the forefront".

In the Netherlands, he was later named as a possible European Commissioner following the 2014 European elections; the post instead went to Foreign Minister Frans Timmermans.

He was succeeded as Minister of Finance by Wopke Hoekstra (Christian Democratic Appeal) on 26 October 2017. He resigned from the House of Representatives the day before, while having been reelected during the 2017 Dutch general election in March; William Moorlag entered the States General to fill the vacancy. 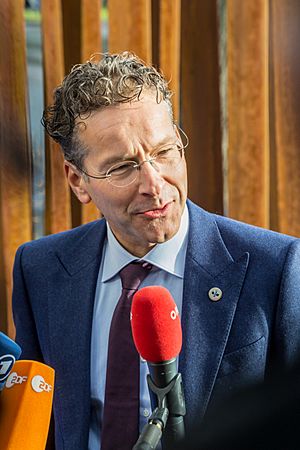 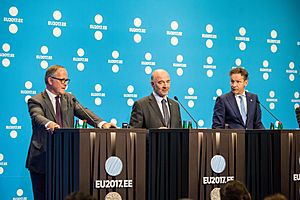 Benoît Cœuré and Pierre Moscovici alongside Jeroen Dijsselbloem in 2017

On 21 January 2013, Dijsselbloem took office as President of the Eurogroup, a grouping of the Ministers of Finance of the Eurozone, those member states of the European Union (EU) which have adopted the euro as their official currency; he succeeded Jean-Claude Juncker. Spain was the only country not to back his candidacy.

Dijsselbloem struggled early in his two and a half-year term and faced criticism for his handling of the "Cyprus bail-in." In March 2013, he took the lead in the negotiation, conclusion and subsequent public promotion of the bailout. He attracted criticism for the precedent of taking depositors' balances as part of bank rescues but said "I am pretty confident that the markets will see this as a sensible, very concentrated and direct approach instead of a more general approach... It will force all financial institutions, as well as investors, to think about the risks they are taking on because they will now have to realise that it may also hurt them."

As Eurogroup head, Dijsselbloem later represented European creditors in negotiations with Greece over its bailout packages following Syriza's victory in the January 2015 legislative election. Initially the Greek government formed by Syriza and the Independent Greeks pursued bilateral talks with creditors and later the Eurogroup agreed on an extension of the bailout for four months. The negotiations for a new bailout package failed to meet the deadline for a €1.1 billion repayment to the IMF on midnight 1 July 2015 (Athens time). After the 5 July Greek referendum in which the then outstanding bailout offer from the Eurogroup was rejected by 61% of voters, a crisis summit was held on 12 July to negotiate Greece's new bailout request. Ahead of the summit, Dijsselbloem questioned whether the Greek proposals were credible.

A deal for a new bailout package between the parties was finally agreed on Monday 13 July. During the debate on the third bailout agreement in the House of Representatives of the Netherlands on 15 July, Dijsselbloem criticised the Syriza government as ideologues, saying that their "every sentence had ideological baggage". He also received criticism for subterfuge in return from Greece's chief negotiator, the Finance Minister Yannis Varoufakis, who published this account in his book Adults in the Room: "From my first Eurogroup, Jeroen Dijsselbloem began an intensive campaign to bypass me altogether. He would phone Alexis Tsipras, my prime minister, directly – even visiting him in his hotel room in Brussels. By hinting at a softer stance if Tsipras agreed to spare him from having to deal with me, Dijsselbloem succeeded in weakening my position in the Eurogroup – to the detriment, primarily, of Tsipras".

In August 2014, German Chancellor Angela Merkel gave her backing to Spain's Economy Minister, Luis de Guindos, in his bid to succeed Dijsselbloem as head of the Eurogroup from 2015; De Guindos is a member of the same center-right political European People’s Party political bloc. Meanwhile, on 5 June 2015, Dijsselbloem announced he would seek a second term, prompting de Guindos saying he would mount a challenge. In a subsequent letter requesting that he be reappointed to serve another two-and-a-half years as Eurogroup chair, Dijsselbloem pledged that he would push for eurozone-wide social and fiscal reforms designed to promote the smooth functioning of the currency union. Once he picked up 10 votes at a Eurogroup meeting in July 2015, the remaining countries decided to vote unanimously for a second term.

In June 2015, Dijsselbloem, alongside Mario Draghi of the European Central Bank, Jean-Claude Juncker at the European Commission and Donald Tusk at the European Council, issued the so-called "Five Presidents' Report" on the future of the European Monetary Union, including proposals that mostly echoed calls by Germany and other northern eurozone countries to enforce spending rules across the eurozone. On 4 December 2017, Mário Centeno was elected as his successor as President of the Eurogroup.

Following the resignation of Christine Lagarde as managing director of the International Monetary Fund (IMF) in 2019, Dijsselbloem and Kristalina Georgieva were the final candidates considered by European governments as potential successors; Dijsselbloem was supported by a group of countries led by the Netherlands and Germany. Georgieva eventually got the backing of 56% of EU states which however represented only 57% of the bloc’s population, falling short of one requirement. However, Dijsselbloem conceded defeat.

Dijsselbloem and his partner live together in Wageningen. They have a son and a daughter.

All content from Kiddle encyclopedia articles (including the article images and facts) can be freely used under Attribution-ShareAlike license, unless stated otherwise. Cite this article:
Jeroen Dijsselbloem Facts for Kids. Kiddle Encyclopedia.