Jesús Alexander Aguilar (born June 30, 1990) is a Venezuelan professional baseball first baseman for the Miami Marlins of Major League Baseball (MLB). He has also played for the Cleveland Indians, Milwaukee Brewers, and Tampa Bay Rays. Aguilar was an All-Star in 2018. 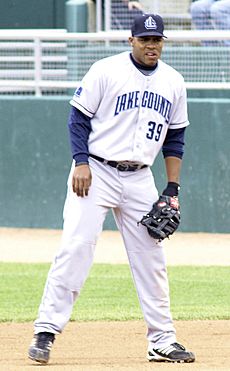 Aguilar playing for the Lake County Captains in 2011

Aguilar signed with the Cleveland Indians as an amateur free agent in November 2007. He spent his first two seasons with the Dominican Summer League Indians. After splitting 2010 between two minor league teams, he hit 23 home runs during the 2011 season between the Lake County Captains of the Class A Midwest League and the Kinston Indians of the Class A-Advanced Carolina League. In 2011, Aguilar was also on the Carolina Mudcats roster, then an affiliate of the Cleveland Indians. Aguilar and Francisco Lindor represented the Indians in the 2012 All-Star Futures Game. The Indians invited Aguilar to spring training in 2013 as a non-roster invitee. 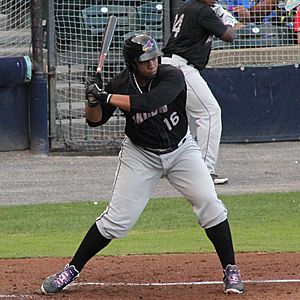 Aguilar with the Akron Aeros in 2013

Starting the 2014 season with the Columbus Clippers of the Class AAA International League, Aguilar batted .298 with seven home runs and 19 RBIs in 37 games, before the Indians promoted him to the major leagues on May 15, 2014. He was returned to Columbus on June 6 after playing in eight games for the Indians.

Aguilar was claimed off waivers by the Milwaukee Brewers on February 2, 2017. After a strong performance during spring training in 2017, Aguilar made the Brewers' Opening Day roster. He played in 133 games, finishing the season with a .265 batting average, .331 OBP, 16 home runs, and 52 RBIs.

Aguilar continued to play in 2018, due to an injury to Eric Thames. Batting .307 with 23 home runs and 67 RBIs, he won the NL's Final Vote for the 2018 MLB All-Star Game and he also accepted an invitation to participate in the Home Run Derby. He cooled off in the second half, but still finished the season hitting .274 with 35 home runs and 108 RBI, and tied for the major league lead in sacrifice flies (10). In the 2018 NLDS, against the Colorado Rockies, he went 1-for-11 with a home run in Game 3 off of German Marquez in the Brewers' series-clinching 6-0 victory. In October 2018, Aguilar was awarded the Luis Aparicio Award, which is given annually to a Venezuelan player in Major League Baseball (MLB) who is judged to have recorded the best individual performance in that year.

On July 31, 2019, the Brewers traded Aguilar to the Tampa Bay Rays in exchange for Jake Faria. After the trade to Tampa Bay, Aguilar hit .261 in 37 games for the team. He was designated for assignment on November 27, 2019.

Aguilar was born to Jesus and Maria Aguilar, and is the youngest of three children.

All content from Kiddle encyclopedia articles (including the article images and facts) can be freely used under Attribution-ShareAlike license, unless stated otherwise. Cite this article:
Jesús Aguilar Facts for Kids. Kiddle Encyclopedia.