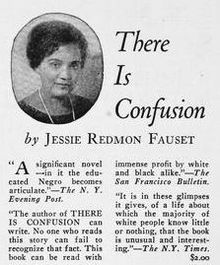 Advertisement for There is Confusion

Jessie Redmon Fauset (April 27, 1882 – April 30, 1961) was an American editor, poet, essayist and novelist. She wrote more books than any other African-American female novelist of the Harlem Renaissance.

Her life and work

Fauset was born in Fredericksville, New Jersey, in Camden County. She was the daughter of Anna Seamon and Redmon Fauset, a Presbyterian minister. Her mother, Annie, died when she was still a little girl.

Fauset attended Philadelphia High School for girls. She was the only African-American student to graduate. After high school Fauset graduated from Cornell University in 1905. She was also the first African-American woman to be honoured by being made a member of the "Phi Beta Kappa" Society which encourages talented undergraduate students. In 1912, when she was only 16 years old she started work at the NAACP's journal, "The Crisis". The NAACP is the "National Association for the Advancement of Colored People", an organization that was begun in 1902 to help African-Americans, and is now one of the oldest civil rights organizations in America. From 1919 to 1926 Fauset was the literary editor of "The Crisis". She wrote 77 published works of which 58 were first published in the journal.

She is the author of four novels, There Is Confusion (1924), Plum Bun (1928), The Chinaberry Tree: A Novel of American Life (1931), and Comedy, American Style (1933). She was made an honorary member of the women's society for academics whose work has really helped other people, "Delta Sigma Theta".

Fauset worked as a school teacher for many years. She stopped teaching in 1944. She died in 1961 from heart failure.

Kevin De Ornellas has written five articles about Fauset in "Writing African American Women: An Encyclopedia of Literature by and about Women of Color" (Greenwood Press, 2006), edited by Elizabeth Ann Beaulieu. One article is a biography; the other four pieces analyze her four novels.)

All content from Kiddle encyclopedia articles (including the article images and facts) can be freely used under Attribution-ShareAlike license, unless stated otherwise. Cite this article:
Jessie Redmon Fauset Facts for Kids. Kiddle Encyclopedia.