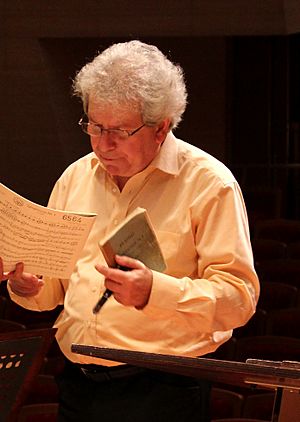 Jiří Bělohlávek (24 February 1946 – 31 May 2017) was a Czech conductor. He was the principal (main) conductor of the BBC Symphony Orchestra. His name "Bělohlávek" means "Whitehead". It is pronounced "Bye-lo-hla-vek". He was born in Prague.

Bělohlávek studied conducting with Sergiu Celibidache. He went to the Prague Conservatory and Academy of Performing Arts in Prague. He won the 1970 Czech National Conducting Competition and soon became famous in his country and abroad.

Bělohlávek was chief conductor of the Prague Symphony Orchestra from 1977-1989. He became principal conductor of the Czech Philharmonic Orchestra in 1990 for a short time. Then he founded the Prague Philharmonia (Pražskou komorní filharmonii) in 1994, They gave concerts all over the world together and made many recordings. He is still their conductor laureate (honorary conductor).

From 1995-2000, Bělohlávek was principal guest conductor of the BBC Symphony Orchestra. In 2006 he became their principal conductor. He conducted them at the Proms that year. In 2007 he conducted at the Last Night of the Proms.

Bělohlávek also conducts in the United States. He first conducted at the Metropolitan Opera (Met) in December 2004, conducting Leoš Janáček's "Káťa Kabanová" with Karita Mattila in the title role. He returned to the Met in January and February of 2007 for the same composer's "Jenůfa", once again with Mattila, and with Anja Silja as the Kostelnička. Other guest conducting appearances in the US have been with the Philadelphia Orchestra and the Saint Louis Symphony Orchestra.

All content from Kiddle encyclopedia articles (including the article images and facts) can be freely used under Attribution-ShareAlike license, unless stated otherwise. Cite this article:
Jiří Bělohlávek Facts for Kids. Kiddle Encyclopedia.